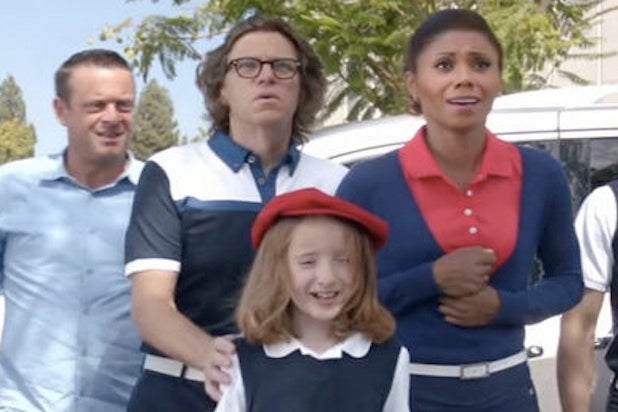 “The Neighbors” has been evicted from ABC. At least, according to multiple cast members, it has been.

The series, which centers on a family that moves to a gated community and discovers that their new neighborhood is populated by space aliens, has been given the ax by the network, cast member Toks Olagundoye tweeted Friday.

Tweeps, I have known since last night, but was not able to share the news until it was announced publicly. #TheNeighbirs has been cancelledðŸ˜”

“Tweeps, I have known since last night, but was not able to share the news until it was announced publicly. ‪#TheNeighbirs‬ has been cancelled,” Olagundoye, who plays Jackie Joyner-Kersee on the series, wrote.

“On the bright side: when I am sad and anxious I clean. My apartment is going to be spotless!!!” she later added. “Dinner off the floor, anyone?”

ABC would not confirm the cancellation of the series, which ran for two seasons, to TheWrap.

Olagundoye’s castmate Simon Templeman, who plays Larry Bird on the series, also weighed in on the show’s apparent demise.

“Thanks everyone who watched and supported ‪@TheNeighborsABC‬ and thanks ABC for finding a home for us for 44 fun episodes,” Templeman tweeted.