CBS will replace the longest-running drama on television with what’s behind door number one.

The network has given the go-ahead to a new version of "Let’s Make a Deal," the product placement-friendly game show in which contestants bargain for the best possible prizes while trying to avoid getting zonked. 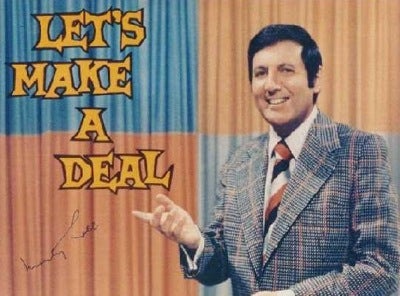 Comic/actor Wayne Brady ("Don’t Forget the Lyrics!") is expected to host the new "Deal," filling the legendary shoes of original host/producer Monty Hall, said people familiar with the details of the decision. FremantleMedia North America is producing the revival, which is expected to launch Oct. 5.

The pickup gives FremantleMedia two hours of real estate on the CBS daytime lineup — the studio also produces the long-running "The Price Is Right."

And it also reunites Brady with his "Whose Line is It Anyway" colleague, Drew Carey. Carey hosts "Price."

CBS is expected to officially announce the deal for "Deal" Monday morning at its portion of the Television Critics Assn. summer press tour. The network has left a hole in its tour schedule; it’s likely Brady and the "Deal" producers will fill that gap.

Network officials weren’t commenting Sunday on the "Deal" pickup, or what it means for the other big contender for "Guiding Light’s" time slot — a new version of "The $100,000 Pyramid." That show, from producer Michael Davies, also taped a pilot this summer and had been considered a strong candidate for a series order.

One of the big advantages of "Deal," however, is that its format is ideally suited to show off potential sponsors’ brands — a major plus in an age when networks are looking to integrate brand messages into programming. "Price Is Right" has proven that such an ad-friendly format can work on CBS.

"Let’s Make a Deal" first premiered as an NBC daytime series in 1963, then jumped to ABC in 1968, running an additional eight years. At least three different syndicated versions of the format have been attempted over the years.

Most recently, NBC tried to bring back "Deal" in prime-time, airing several episodes of a revival in 2003.