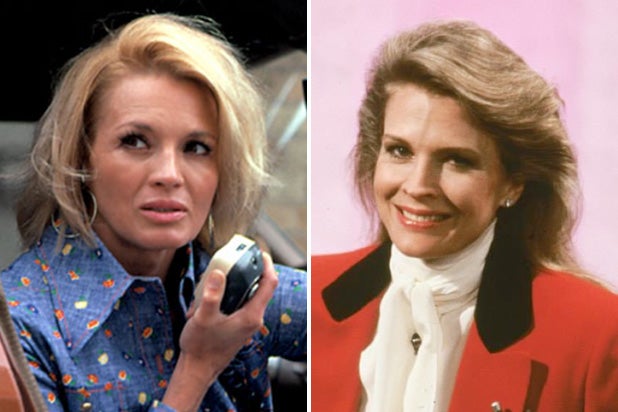 It has not always been thus. Starting in the 1950s, names like Lucille Ball, Jane Wyatt, Donna Reed and Loretta Young were beginning their repeated runs for Emmy glory, often for playing housewives who rarely were allowed to know best. Only Harriet Nelson was left off the list of those nominated for opening their doors with a smile on their face, and a roast in the oven, when the men came home.

Of course, those the ’50s television shows reflected what was going on in real — as well as reel — homes. According to the U.S. Department of Labor’s Bureau of Labor and Statistics, the labor force participation rate for women was 33.9 percent in 1950.

Also Read: How Streaming Networks Invaded the Emmys: From 'House of Cards' to 'Handmaid's Tale' (Photos)

So TV series, by definition, were focused on the guys — whether in their offices or on their horses. A few more females emerged by the mid ’60s, though they tended to be be-witched or needed a magic lamp to be empowered. And no one — either  journalists or viewers — was asking, Is there a Mrs. Ed?

There was no particular concern that Diahann Carroll’s Julia, a groundbreaking role for a black actress on TV, was a nurse and not a doctor. Betty Friedan was just warming up her pen, and those who reported on Hollywood didn’t even question the subservient roles women portrayed on television.

Sometimes, we get a story’s importance only in hindsight. There were two actresses who were pivotal in feminizing the face of television: one for being the face of a heretofore macho format, one for playing a character so independent and contemporary that the Vice President of the United States at the time attacked her.

Both also made what were then brave leaps from the large to small screen. They were certainly noted at the time, but better late than never to add some perspective — and gratitude.

In 1974, producer David Gerber offered Angie Dickinson the title role in NBC’s “Police Woman,” a spinoff from the original “Police Story.” If she took the role, he promised her, she would become a household name in America. (Fan Gerald Ford once even rescheduled a White House press conference because it conflicted with the show.) Dickinson had been known for a sultry voice, legendary legs, and a rumored dalliance with JFK. “I’m strong…I’m sturdy,” she told Mary Murphy in TV Guide. Murphy’s editors, and others reporting on the actress largely focused on her looks and private life.

What was less noted was that she earned three Emmy nominations and the show proved that a woman could not only lead a dramatic series, but that a female character could be efficient and tough in a man’s world. Successors like “Cagney and Lacey,” “Prime Suspect,” “The Closer” and others offered further confirmation.

On the comedic side, TV actresses certainly had proven they could be funny, none more so than Lucille Ball. Off screen, she was a powerful producer but on camera her character was zany and goofy, albeit beloved. Marlo Thomas’ “That Girl” and later, of course, “The Mary Tyler Moore Show” and “Designing Women” reaped attention for focusing on single women (who appreciated women friends) but they were not in charge.

Fast forward to Candice Bergen and “Murphy Brown.” Here was a tough, funny, often abrasive, but likable (hey, it was network TV) woman who had the power to tell others they had spunk.

“The seminal change in television, in terms of women’s roles, was ‘Murphy Brown,'” said Larry Lyttle, whose company, Warner Brothers Television, produced the sitcom for CBS. “She proved that women could hold their own with their male counterparts — and look beautiful at the same time, by the way.” Lyttle reminded us that JoBeth Williams was all but committed to star in the show: She was a close friend of creator Diane English and a substantial advance was paid to keep her on hold.

However, Williams did not like the script and pulled out. (Something, she told others, she later regretted.) That’s when the producers got a call from Candice Bergen’s agent, saying the 42-year-old actress was interested. CBS Entertainment President Kim LeMasters was skeptical and insisted that she do an audition. She did, and the rest is history. Bergen won so many consecutive Emmys (five in all) that she subsequently pulled out of the category so others could take the trophy home.

“Murphy Brown” had a slow build in popularity, particularly in the entertainment press, but it hit the heights when the title character gave birth as a single mother. Vice President Dan Quayle took to the airwaves to ask what was happening to the moral fiber of a country that would honor an unwed mother in prime time. The character made the cover of Time Magazine, proving that even those who did not cover the biz understood its impact on the larger society. Ironically, the New York Times this month featured a photo of Murphy in its op-ed piece about how women in the workplace were probably doing better 20 years ago than they are today.

“The significance of that character — and her move from features — was profound,” said Lyttle (who went on to turn a judge named Judy Sheindlin into a TV mega-star.) The move gave other actresses (and actors) permission to make the transition that was formerly considered a step down. And eventually, writers and producers started creating female characters of a certain age — just as features were losing interest in them.

Now, of course we have countless film actresses making the sideways shift. At a recent DGA screening of an episode of “Feud,” both Susan Sarandon and creator Ryan Murphy were asked about women’s roles on TV. “The fact we are even having these discussions shows how far we’ve come,” she said. Murphy explained that his experiences working with people like Sarandon, Jessica Lange and Sarah Paulson had forced him to re-evaluate his hiring practices both in front of and behind the scenes. (Thus was born Murphy’s Half foundation, dedicated to promoting gender diversity in the industry.)

Entertainment reporters certainly get credit for not only keeping the conversation going, but disseminating the work of places like USC, Geena Davis’ Institute on Gender in Media and Reese Witherspoon’s “Ask Her More” campaign.

On Emmy night, let us celebrate the wide array of female talent and the depth of their characters. As Witherspoon recently pointed out, actresses are not just playing wives and mothers anymore. If she has her way, reporters on the red carpet would not dare ask the nominated actresses about who designed their dresses, but about their decisions to take on passion projects and complicated characters.

And may the best woman win.