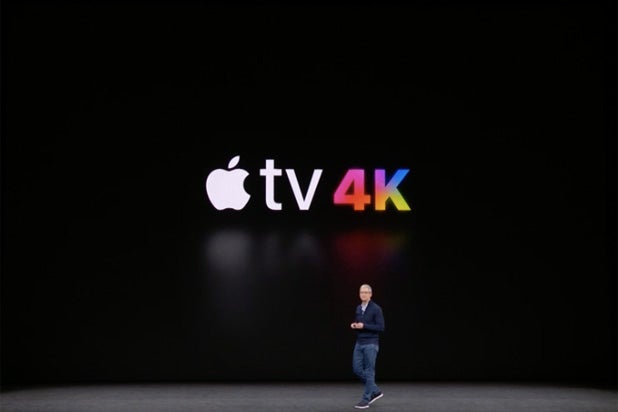 Apple CEO Tim Cook unveiled the first — and widely expected — 4K Apple TV at the company’s annual event Tuesday, the first of its kind held at the Steve Jobs Theater in Cupertino, California.

The new TV, which includes live sports and news apps, costs $179, can be ordered starting Sept. 15 and ships on the Sept. 22. As Apple prepares to spend $1 billion on original content, it’s natural that the company would want to improve its flagship tool for delivering it, the Apple TV.

“This will bring cinematic quality to virtually everything that you watch,” Cook said.

The 4K Apple TV contains the same chip that’s in the iPad Pro, and is twice as fast as the existing Apple TV in processing speed, with graphics more than four times faster.

“Now to experience 4K in HDR, you also need great content,” Cue said. “Now you’ll have the biggest releases in the best picture quality on iTunes all available for the same price as HD.”

Cue said that owners of those movies in HD would even get them upgraded to 4K.

And as the company positions the device to replace cable boxes worldwide, Cue also announced easier ways to consume some of its most popular content, including live news and a new integration with Disney’s ESPN.

“We’re bringing live sports so you never miss a game,” he said. “If your favorite team is playing on ESPN, it will automatically appear in the ‘up next’ list.”

Also Read: Apple's TV Content Push: Who Will Get a Piece of That $1 Billion?

The new live sports tab will also alert users when there are close games or other events of interest — but those who choose to record games can disable the live updates. Further details are unclear — but if the presence of Disney chief Bob Iger at the Apple event is any indication – it’s probably not the last time ESPN and Apple TV get together.