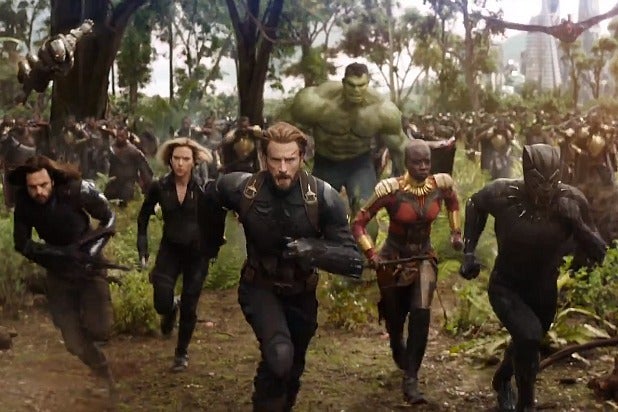 The reviews for Marvel Studio’s “Avengers: Infinity War” are in, and the consensus about Marvel’s epic superhero team-up is — mostly — that it’s fantastic.

One of the biggest fans of “Infinity War” was the man who helped make it possible — comics writer Jim Starlin, who co-created Thanos for Marvel in 1973. “There are a couple times my chest constricted from what I was seeing, making me want to cry,” Starlin said in a Facebook post praising the film.

The Avengers the Infinity War! I really have to watch what I say here, so as to not spoil the many surprises this film…

With 71 early reviews in, “Avengers: Infinity War ” currently has a 89 percent score on Rotten Tomatoes, and critics are mostly praising the film’s scope, ambition, and execution. TheWrap’s Alonso Durade wrote, “If you’re a viewer who binges TV dramas because you can’t wait a week to find out what happens, the implied ‘to be continued’ at the end of ‘Infinity War’ may drive you batty. But if you’ve been solidly along for the Marvel ride up to this point, you’ll enjoy this leg of the journey even if it hasn’t yet reached the terminal.”

“Avengers: Infinity War” is the Marvel film you’ve been waiting for ten years now. Everything that has proceeded it brings you to this very climactic event. I have never been this awestruck by a film in my entire life. Thanos is a force of nature and the deadliest Marvel Studios villain to ever exist. He easily takes the crown from Michael B. Jordan’s Killmonger. The highlight of the film has to be Chris Hemsworth’s Thor. I believe this film will go down in history as one half of the greatest superhero movie of all time.

Is it possible to have too much of a good Marvel thing? “Avengers: Infinity War” tests that theory to the max. Don’t get me wrong: This movie is an epic event, built to celebrate the end of a decade in which the Marvel Cinematic Universe produced 19 films.

“Avengers: Infinity War” is the most ambitious, most audacious, most mindblowing superhero film ever produced. It is visually sumptuous, spectacularly entertaining, emotionally shocking and resonant. It is the perfect fulfillment of a promise Marvel made 10 years ago, and everything fans are hoping it could be. THIS is why the superhero genre exists.

What saves “Infinity War” from being just another bloated supergroup tour – and what will end up being the thing that blows fans’ minds to dust – is the film’s final stretch. Let’s be clear, when it comes to hand-over-fist cash cows like the Marvel films, any time a character is put into any sort of serious jeopardy, you immediately have raise an eyebrow and roll your eyes a bit. All of these characters are such lucrative intellectual properties no studio, no matter how daring, is going to put them into too much jeopardy… Still, there is something thrilling about watching just how much fun the Russos and writers Christopher Markus and Stephen McFeely are having messing with the fans here.

“Infinity War,” by design, feels like one half of a completed puzzle, with the other pieces strewn about waiting to be put together. Maybe once it’s whole, the puzzle will be wholly satisfying. For now, “Infinity War” suggests that Marvel is able to wrangle together a massive, charming cast, but not quite create a story that deserves their presence.

“Avengers: Infinity War” upends the Marvel Cinematic Universe, as promised. It’s a spectacle unlike any movie before it, offering a ferocious narrative which fans of the Marvel Cinematic Universe will love but the average or young moviegoer might have a bit of trouble with. It is dark, it is fun, and it is bigger than anyone could have imagined. It substitutes some of the focus seen in previous Marvel films with wider-ranging narrative to create a sprawling, jaw-dropping, utterly relentless epic.