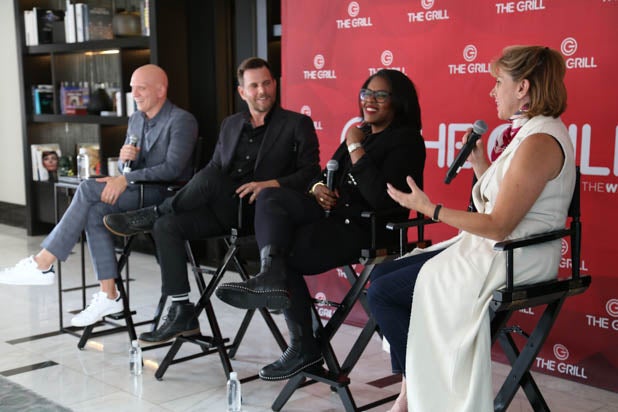 “Barry” actor Anthony Carrigan says the “worst thing that could’ve possibly happened” to him eventually did happen: He lost all of his hair as a result of alopecia. He feared he could lose his career, his confidence and his way of life, but he turned adversity into his scene-stealing role on the HBO comedy.

“What’s cool is that I would’ve never guessed ever that this thing that I had such shame over would not only be something that I would come to terms with, but it would be the thing that I now love the most about myself,” Carrigan said “You’re missing out on that really wonderful lesson and experience, which is that, when you accept it, the road just opens up for you.”

Carrigan spoke with TheWrap founder and Editor-in-Chief Sharon Waxman as one of 12 individuals featured on TheWrap’s annual Innovator’s List. He was among  three who joined the Innovator’s Panel at The Grill, TheWrap’s annual conference on entertainment and technology. His fellow honorees were Dave Rubin, the host of the YouTube show “The Rubin Report,” and Brie Miranda Bryant, the senior vice president at Lifetime and the guiding force behind the documentary “Surviving R. Kelly.”

Rubin and Bryant also experienced adversity before moments that helped define their 2019.

Rubin recalled sitting with a group of other commentators in a green room before doing a segment on HLN. He described everyone in the room as friendly and amicable, but then the producers sequestered each commentator into an individual booth and filmed them as though each was remotely broadcasting in from another country. Suddenly the conversation turned nasty, and Rubin felt he was doing more harm than good.

“Something is really wrong here. We’re not helping the situation in doing this,” Rubin said.

He said his independent YouTube show invites deep conversations with people of all viewpoints.

“We built something that I think people are looking for,” he said. “You can turn on any cable news show at any moment and watch, anything, tonight, go turn on Fox, CNN or MSNBC for three minutes, and you will not feel better. Not only will you not feel better, you’ll feel worse, and you’ll probably be a little dumber for having done it.”

Miranda Bryant said she was tasked with finding some way to bring Lifetime into the #MeToo conversation, and faced a major setback when she had to pitch her boss a bland roundtable discussion that she didn’t believe in.

“We’ve always been a network that’s been a platform for women’s voices for 35 years. But the question was, how do you become a part of this conversation that’s become part of the ether, and how do you do it differently,” Miranda Bryant said. “How do you create something that says something after the hour is over?”

Also Read: How to Be a 'Real' Producer: Know Your Audience and 'Fight for Your Life'

In “Surviving R. Kelly,” she took a risk on something that Lifetime wasn’t generally known for. The documentary was factual but was imbued with emotional heft. That realness pulled people toward the film’s message.

In light of their struggles, Carrigan, Rubin and Miranda Bryant offered some advice.

“Innovation, there’s a fearlessness to it,” Miranda Bryant said. “Be fearless about it. You will fall a million times, and it should be the motivation to get back up again,” she said

“Say what you think. We live in a time with a bravery deficit,” Rubin said. “If you believe in it, most likely someone else does.”

“Don’t get down on yourself,” Carrigan said. “And be kind to yourself, and be kind to other people while you’re doing it. It’s going to get you there a lot faster.”