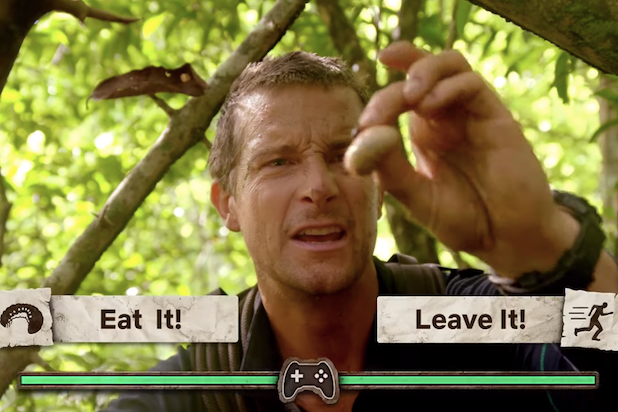 Bear Grylls didn’t survive this long by being dumb. The survivalist is well aware that you’re all just going to try and kill him on his new Choose-Your-Own-Adventure-style Netflix series “You vs. Wild.”

“This is what I was worried would happen!” he told us ahead of the premiere. “I am not sure I like the feeling!”

TheWrap interviewed Grylls via email because, well, the dude isn’t often in an area with good cell-phone reception. We kept the conversation pretty brief, as the assumption is Grylls is pretty much always facing imminent danger.

Our chat is below — the exclamation points are all genuine Grylls excitement.

TheWrap: What’s the weirdest/coolest option you filmed for “You vs. Wild”?
Bear Grylls: Probably the option of what to do with some old explosives down an old mine, [or] a rattlesnake and bleeding from a wound! I won’t spoil the options or ending for you…

TW: Were any of the choices something you hadn’t done before?
BG: So many of them took me to a survival disaster situation that was entirely new and that’s the fun part — with a detailed plan we could create some pretty crazy scenarios for viewers to have to figure out…

TW: Do you know how many permutations and how many endings exist for “You vs. Wild”?
BG: I lost count after one episode! The planned-disaster scenario reads more like a detective novel!

TW: What scene was the biggest hassle in terms of having to film one option and then go back to the same moment/spot to film the other?
BG: In and out of a frozen lake trying a bunch of different solutions to escape!

TW: You know everyone is just gonna try to kill you, right?
BG: This is what I was worried would happen! I am not sure I like the feeling!