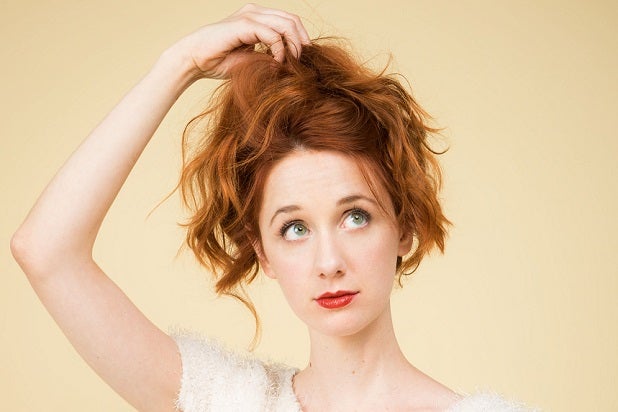 TheWrap spoke with Spencer about splitting time between the two shows, her “BBT” character’s bad blood with Kaley Cuoco‘s Penny and whether her character is as creepy as she seems to be.

TheWrap: Raj’s relationships with women have ranged from nonexistent to completely awkward on “Big Bang Theory.” What are the chances that he and Emily will last, and what is it about their dynamic that might make it work?
Laura Spencer: I hope the chances are good, obviously — I feel like I have a stake in that. I think the pros of their relationship is that they enjoy each others’ weirdness. There hasn’t been any indication that she isn’t thrilled by his strange quirks, and vice versa. I just feel like, even though we keep getting these weird little glimpses of, “Is Emily creepy, or is she cute? What’s going on with her character?” at least Raj is thrilled by her, and she’s sweet with him. They seem to have fun. I think it’s looking good from where I sit, but there may be some crazy twist that they’re going to throw in that I have no idea about.

Emily is kind of sinister and has a taste for the macabre. How much of an adjustment is that for you to play, or is it something you can relate to in real life?
I don’t have some creepy, eerie element to myself in real life, but I think it’s hilarious that they decided to make her [like that]. I don’t know if they had this idea all along, because when I was in the first couple of episodes there was no indication that I was at all strange. So it was a total delight when they just threw in one of my first lines in last season, where I say something like, “I love cutting people with knives and I can do it legally with my job.” I was like, “Wait, am I kidding?” And then they kind of kept going with it so I’m starting to think maybe she wasn’t kidding. I enjoy watching crime dramas and reading creepy stories about serial killers and weird things, but I wouldn’t say my fascination is as much of a turn-on as it is for Emily.

You also have a role on “Bones.” How does that work out schedule-wise?
The way that it works is that everyone on “Big Bang” and “Bones” has been incredible to work with, and they have been making it work so that I can continue to work on both. They’re both aware of my schedule when an episode pops up and they work around it when they can. And so far there haven’t been any conflicts with that. Which has been an extremely lucky position to be in.

How would you compare your character on “Big Bang Theory” to your character on “Bones”?
I think they’re obviously very different women, but I think what’s neat about both characters is that they are intelligent, funny women, and strong characters in that way. I’m feeling very lucky that’s what I get to play out there and represent those types of women.

“Intelligent” and “strong” aren’t universal traits for female characters on television, especially in comedy, but “Big Bang” in particular seems to be good about that.
Well, that’s their audience. They’re aware that their audience is extremely intelligent, and I don’t think they would ever mess with that. That’s what’s also exciting about this show — it’s just a very smart show all around, all the characters and the writing is incredibly smart. It’s just a blast to be on set and see the on-set expert physicist talk about a funny science-related joke. I had a really funny run-in, I was in a hamburger place and I was sitting next to this man who was sitting alone, and we ended up talking about our careers. He was an actual rocket scientist, and he loves “Big Bang Theory” — all of his colleagues watch it. And those are the moments when it feels really cool to be on a show like that.

You came aboard BBT toward the end of last season, and over the summer there was some drama over contract negotiations, with production being postponed. Did you have any concern about your new gig being in jeopardy?
No, they were really good about keeping us posted and saying, “This is still happening and we’re all good.” There was never any drama that I was privy to. I had faith that everybody would work it out, so I was never too nervous. And again, I was in a great position in knowing I was going back on “Bones,” so I wasn’t as worried as others could have been. It was drama-free for me.

Do you have a sense of how this season of “Big Bang Theory” is progressing from last season, and if so what can you share about how this season jumps off from last season?
I just feel like, from where I sit, I know so little until I see the script the night before the table read. I’ll just know that I’m in something and then I’ll discover this whole new dimension. Also there’s this brand-new conflict with Penny and I have no clue where they’re going with it. It will just be news to me when I get the script.

Where would you like the season go for your character?
I would like to see Penny and Emily end up friends. I feel like that could be a really interesting relationship there. I feel like sometimes friendships could develop like that, you hate each other first and then you end up loving each other. Obviously I would love to keep Emily in the living room eating take-out with everybody. That felt good when I got to do it; I’ll never forget it, my first scene on my first episode back, when I got to walk on set with the live audience and hear the applause of everybody seeing my character in the living room. Because that’s such a moment when characters get to be there. It just means something. It’s like, “Wow, you made it onto Sheldon’s couch.”