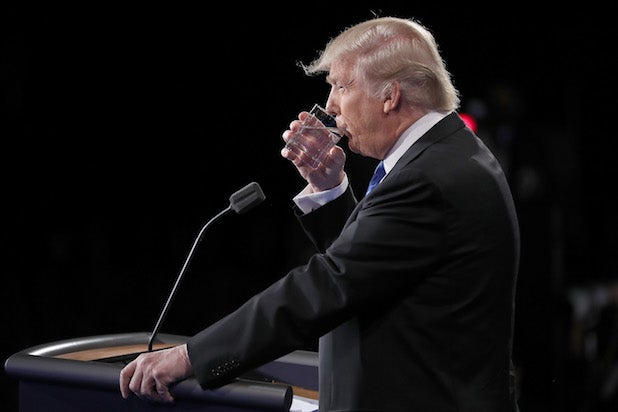 Who says when Donald Trump speaks, nobody listens? In addition to the many millions of Americans who tuned in to the first 2016 presidential debate, the Merriam-Webster folks had their eyes on the TV set, ears to the ground, and fingers on the keyboard last night.

And the dictionary ripped the GOP nominee for his use of “braggadocious,” a word he’s debated with before.

“I have tremendous income, and the reason I say it is not in a braggadocious way,” Trump said Monday. He was rebutting Hillary Clinton’s criticism over those still-secret tax returns.

Also Read: Presidential Debate Reporters Get Nasty: 'Thanks a Lot, B---!' (Video)

But here’s what Vocabulary.com’s executive editor had to say about the usage last year, when Trump invoked it during the Republican debates:

“So braggadocious, it’s an adjective formed from the noun braggadocio, which can mean vain and empty boasting,” he told NPR. “In 1853, there was something in The Boston Investigator referring to a swaggering, braggadocious piece of egotism. So it was being used all the way back in the mid-19th century, and it’s popped up from time to time since then. It still sounds like a very sort of funny, made-up word. And the Oxford English Dictionary suggests it’s influenced by other words, like ferocious, precocious and atrocious, or that super-long word from ‘Mary Poppins,’ perhaps.”

You word-nerds can debate that out amongst yourselves.

And then there was these interesting ones from Tuesday morning:

????'Braggadocio' still near the top of our lookups this morning. Trump said 'braggadocious' in the debate. https://t.co/tEkLd4PJz3

????Both 'bigly' and 'big league' are real words, though 'big league' is rarely used as an adverb. https://t.co/zHTNNl1XAE