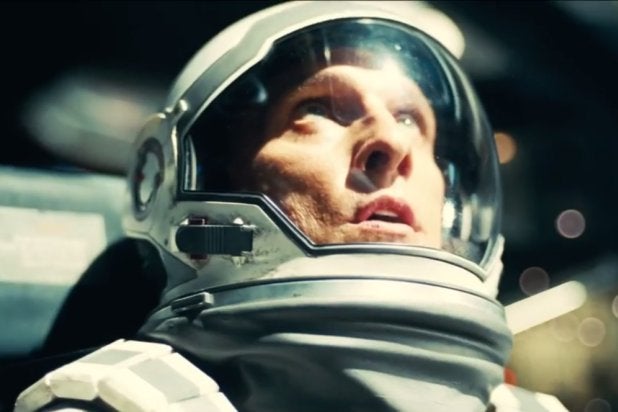 An undeniable awards contender exploded onto a huge Imax screen for a select audience of Hollywood tastemakers and talent on Wednesday.

“Interstellar,” by writer-director Christopher Nolan, has been held tightly under wraps and eagerly awaited, not least because the filmmaker (“Inception,” “The Dark Knight”) consistently works with big ideas on a vast visual canvas.

“Insterstellar” did not disappoint in that regard, offering up the filmmaker’s stunning vision of a future in which the survival of humanity is not a given. The movie stars Matthew McConaughey as Cooper, an astronaut seeking new habitats in space as humanity chokes on a dying earth.

Also see: Matthew McConaughey Must Choose His Daughter or All of Humanity in Latest ‘Interstellar’ Trailers (Video)

The elite group invited by Paramount CEO Brad Grey got to see the film on a screen seven stories high and 90 feet wide at the California Science Center, which was awesome, but only more so with dignitaries including directors Francis Ford Coppola and Gus Van Sant, actors Adrien Brody and Hailee Steinfeld, producers Lawrence Bender and Mark Johnson and legends like Peter Fonda in the room.

The experience left the A-list audience breathless with the sheer intensity of the film, featuring soaring scenes of interplanetary travel, and imagining for us what it might be like to be sucked into a wormhole. Those images contrasted with bleak landscapes of farmers living in a futuristic dust bowl back on earth.

Also see: Ben Affleck Is Batman: 16 Actors Who Played the Dark Knight Before Him (Photos)

After the screening at a gathering under the wing of the actual space shuttle, Chastain said she was excited to work with Nolan, and had noticed that the insignia for the film project was “Flora’s Letter.” On set she learned that Flora is the name of Nolan’s young daughter.

“After that, I just completely opened up to the story,” she said. “It gave me chills.”

The film will be seen by critics and reviewed on Monday.