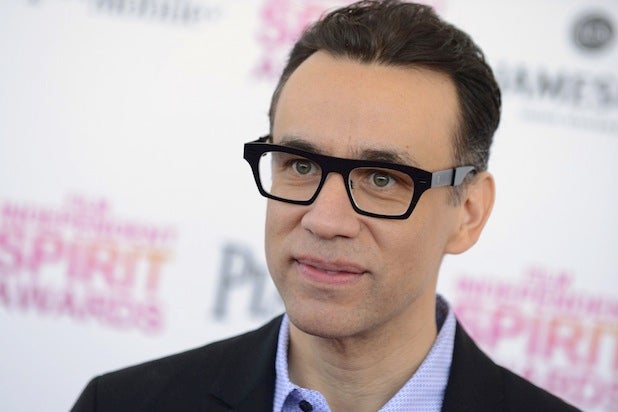 The network will collaborate with College Humor on the Comedy Music Awards, which it describes as “a satire of traditional awards shows incorporating the best of the comedy and music worlds.” The documentary series reunites Meyers and Armisen — stars of NBC’s “Late Night” — with Hader.

It announced its full slate Thursday ahead of its upfronts presentation to advertisers.

IFC also plans a fourth season of “Comedy Bang! Bang!” and a second season of its original sketch show “The Birthday Boys,” executive produced by Bob Odenkirk. And it announced a new series from Rob Huebel (“Childrens Hospital,” “Human Giant”) with the working title “American Storage.” It will be a scripted half-hour comedy.

The network’s development slate includes “Westside” from Joel McHale and “The Bank” from Teri Weinberg.

“IFC began the year with significant momentum that continues to accelerate,” said Jennifer Caserta, IFC’s president. “We’re delivering more original programming that is resonating with viewers, and key advertisers are seeking us out to reach consumers through the power and authenticity of our alt comedy voice.  Through our current slate, IFC is continuing to partner with some of the biggest and most sought after comedians in the business and we’re so thrilled that our viewers will be able to enjoy what they do best.”

Here is the full slate, as described by IFC:

American Documentary is a curated series of half-hour documentaries and biopics, each about a completely fictitious subject. Featuring a repertory-like ensemble cast, the episodes will explore important political figures, influential artists, titans of industry, and iconic cultural movements, all utterly fictional. Produced by Lorne Michaels‘ Broadway Video Television and directed by SNL’s Rhys Thomas, American Documentary will be shot on location in the traditional documentary style.

IFC has ordered six half-hour episodes to premiere in 2015. Meyers will executive produce the series along with Armisen and Hader, who will have recurring roles. Production is scheduled to begin later this year.

When a straight-laced employee at a storage facility befriends a man he discovers living in one of the units, a friendship blossoms and mayhem ensues. Rob Huebel stars as Kurt Jones, a thrill-seeking bachelor who takes up residence in a Los Angeles storage facility and shows Charlie (John Karna) there’s more to life than a steady job, a hot girlfriend and suitable housing. American Storage is based on the short film of the same name co-written by Andrew Jay Cohen (Neighbors) and Brendan O’Brien (Neighbors) and directed by Cohen. The series is produced by Troy Miller and Dakota Pictures (Arrested Development, Flight of the Conchords).

When comedy and music collide, the results are explosive. IFC and CollegeHumor are coming together to honor the best of the comedy music genre with the first-ever Comedy Music Awards. A parody of traditional awards shows, this on-air and online concert will feature top musical comedy talent and performances set against the backdrop of a fake, overly self-important awards show. Complementary pieces include a new comedy music website, original comedy music videos and interactive digital features that will engage the audience.

IFC has also ordered an expanded fourth season of Comedy Bang! Bang! hosted by Scott Aukerman, with 40 all-new half-hour episodes. This is the second time IFC has doubled its episode order for the series, which aired 10 episodes in season one and grew to 20 episodes in seasons two and three. The show continues to be a favorite among IFC’s viewers and advertising partners with brands such as Volkswagen and Cheez-It appearing through customized storyline integrations.

Infusing untraditional celebrity interviews and comedy sketches with a tinge of the surreal,Scott engages his guests with unfiltered, deadpan lines of questioning, accented by banter and beats provided by Reggie Watts. Each celebrity appearance is blended with mind-bending filmed shorts, random character cameos and over-the-top spoofs.

Produced for IFC by Red Hour and Abso Lutely, and executive produced by Bob Odenkirk, Ben Stiller, Debbie Liebling, Stuart Cornfeld, Mike Rosenstein and Dave Kneebone. The series is written by The Birthday Boys and Bob Odenkirk and directed by Chris VanArtsdalen and Jefferson Dutton.

Created and written by Jordan Okun and executive produced by Joel McHale (Community, The Soup), Jason Burns and Free Period, this half-hour scripted comedy follows a group of suburban schnooks who are forced into a life of crime.

A half-hour scripted comedy, executive produced by Teri Weinberg (The Office, Ugly Betty) and Brigitte Bako (G-Spot), about a dysfunctional family who runs a sperm bank. Bako is also writing the project.