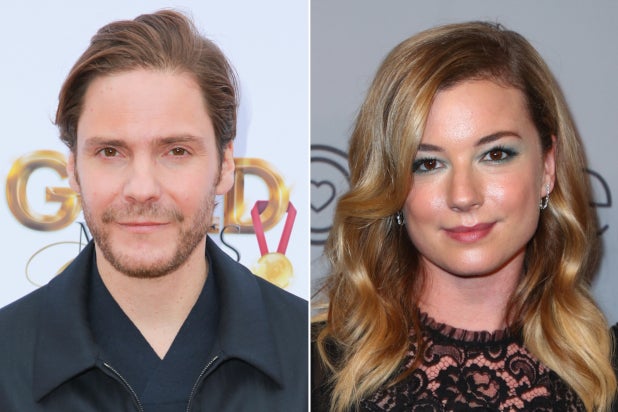 Two more Marvel Cinematic Universe actors are boarding “Falcon and the Winter Soldier,” one of the four planned Marvel Studios series for Disney+.

Emily VanCamp and Daniel Bruhl are in talks to join Anthony Mackie and Sebastian Stan on the Disney+ series, an individual with knowledge of the production told TheWrap. Bruhl and VanCamp both appeared in “Captain America: Civil War” — VanCamp made her MCU debut in “Captain America: The Winter Soldier.” Bruhl played the villainous Zemo, while VanCamp portrayed Sharon Carter, the niece of Peggy Carter (Hayley Atwell).

A rep for Marvel Studios declined to comment. The series stars Mackie and Stan reprising their big-screen roles as Sam Wilson aka Falcon and Bucky Barnes/The Winter Solider, respectively.

Additionally, Kari Skogland will direct the six-part miniseries, which is eyeing an August 2020 debut, the individual said.

Skogland has directed episodes of “The Handmaid’s Tale” and the upcoming AMC series”NOS4A2,” as well as Showtime’s Roger Ailes miniseries “The Loudest Voice.” She is the CEO of Mad Rabbit, a Red Arrow Studios company.

The upcoming series will likely focus on Sam Wilson aka Falcon taking on the mantle of Captain America; at the end of “Avengers: Endgame,” an elder Steve Rogers (Chris Evans) hands Wilson his shield.

Along with “Falcon and the Winter Soldier,” Marvel Studios is developing “WandaVision” (with Paul Bettany and Elizabeth Olsen), “Loki” and an untitled series staring Jeremy Renner’s Hawkeye/Ronin. Marvel Studios’ head Kevin Feige has teased that the Disney+ series will be a major factor in the ongoing narrative of the MCU.

Disney+, the company’s upcoming streaming service, will launch on Nov. 12.