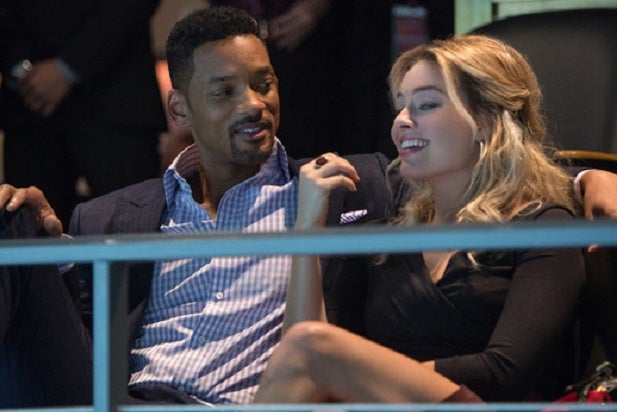 Will Smith’s reputation as one of Hollywood’s most bankable leading men will be on the line when the con man comedy “Focus” opens Friday for Warner Bros.

That’s because “Focus” is Smith’s first film since “After Earth,” the pricey 2012 sci-fi bomb that he starred in with his son, Jaden Smith. Before that, enthusiastic foreign audiences offset disappointing domestic returns on the $225 million “Men in Black 3” in 2010, and 2008’s “Seven Pounds” failed to break out as well.

In his latest outing, Smith plays an aging grifter trying to impart the wisdom of his trade to a young newcomer, played by Margot Robbie. Glenn Ficarra and John Requa (“Crazy, Stupid, Love”) wrote and directed “Focus,” which at one point had their previous film’s stars, Ryan Gosling and Emma Stone — and later Ben Affleck and Kristen Stewart — attached as its leads.

“This film really marks a transition in my life, and emotionally, and in my career,” Smith told journalists assembled for a “Focus” press junket. “After the failure of ‘After Earth,’ a thing got broken in my mind. ‘Oh wow, I’m still alive. Actually I still am me, even though the movie didn’t open (in first place). I can actually get hired on another movie.’

“So when I went into ‘Focus,’ I completely released the concept of goal orientation and got into ‘path orientation.’ This moment … this second … these people, this interaction. And it is a huge relief for me not to worry whether Focus is No. 1 or No. 10 at the box office. I’ve already gained everything I could possibly have hoped for from meeting the people I met and creating what we did.”

Smith says he doesn’t care about how it does at the box office, but Warner Bros. is certainly concerned with the performance of the $55 million “Focus.” Denise Di Novi produced the R-rated comedy — from Smith’s Overbrook Entertainment and Ficarra and Requa’s Zaftig Films — which several analysts believe could be just the ticket for Smith.

“The landscape shifts quickly in Hollywood,” said Jeff Bock, senior analyst at Exhibitor Relations. “Right now he’s caught in quicksand, and needs to catch on to something. This film has an edge, and Smith looks and feels like he’s trying to take his career in a different direction with it.”

The superhero fantasy “Hancock” was the most recent major score for Smith, the one-time hip-hop music star who was once TV’s “Fresh Prince of Bel Air.” Released in July 2008, it was the last in a string of five hit films for Smith between 2004 and 2008 that included “I, Robot,” “Hitch” and “I Am Legend.”

Also Read: Will Smith to Star in Paramount’s Action-Thriller ‘Bounty’

“He raises the stakes because he doesn’t do that many films,” said Bock. “That’s great when they click, but it’s trouble when they don’t.”

Smith’s star still shines brightly abroad, as evidenced by the overseas hauls of “After Earth” ($183 million) and “MIB 3” ($445 million). Warner Bros. will be counting on that from “Focus,” which was shot two years ago in Buenos Aires, New York and New Orleans.

While “Focus” has the potential to resuscitate Smith’s career, it could have just as big an impact for his co-star Robbie, Bock belives.

“She’s a star on the rise, and if this movie succeeds, I can see her getting most of the credit,” he said of the Australian actress who is best known for her role in “The Wolf of Wall Street.”

That would probably be fine with Smith, who could use a hit any way he can get it.