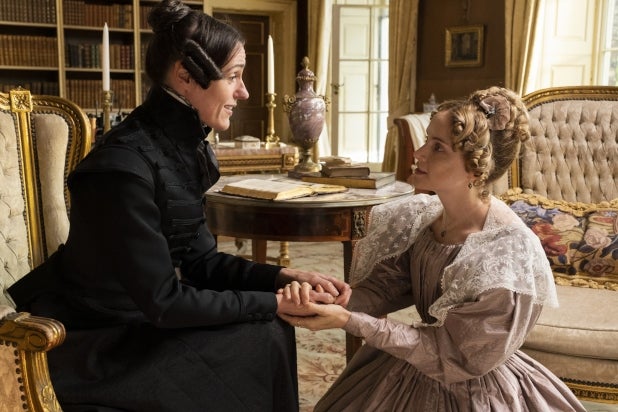 The life-partner and lover of Anne Lister (played by Suranne Jones), Britain’s “first modern lesbian” whose story inspired the series, nearly everything known about Walker’s life comes from Lister’s diaries. From what little information is available aside from those diaries, all we know for certain is that after Lister’s death, Walker was declared insane, and later died in 1854 at her childhood home.

The eight-part series, helmed by Sally Wainwright, tells the story of the relationship between the strong-willed Lister and shy, lonely Walker, an heiress alternately coddled and manipulated by her older family members. The pair met in 1832 and two years later held a private ceremony at Holy Trinity Church in Yorkshire that historians say might have been England’s first lesbian wedding. They remained together until Lister’s death in 1840.

Throughout her life, Lister recorded everything from details of her sexual encounters to daily events in a 27-volume, 5 million word diary, much of it written in a secret code. Some parts of the diary were still being decoded during the filming of “Gentleman Jack.”

“The only stuff that we know is through the diary, which has its challenges,” Rundle says, “because although you get the real person being written about, it’s also done through the opinion of Anne Lister. So you have to take everything with a pinch of salt.”

“Ann Walker had such a difficult life. She had this beautiful love affair, but by no means is that the end of the story,” Rundle says.  “She was plagued by mental health issues her whole life — not only plagued by her own mental health issues, but by the lack of understanding of people around her. Because at that time, people just didn’t know anything about it. Women were just written off as being insane and crazy, and she was the real victim of that.”

And because her union with Lister was not legally recognized, she wasn’t treated like any other widow would have been at the time.

“It was only by them that they considered themselves wife and wife, and certainly without the protection of someone as bold and intimidating as Anne Lister, I think Ann Walker was just left to the wolves,” she says.

Since the contents of her diaries were decoded and made public, Anne Lister has become recognized as a LGBTQ trailblazer and icon, but Walker’s story remains obscure, something Rundle hopes “Gentleman Jack” will change.

“Both of them made the extraordinary decision to live their lives openly as they could as a couple, and that took extraordinary strength from both of them,” Rundle says. “We still have to sideline the wife, ignore the wife, even when it’s two women getting married in 1836.”

She continues, “What these women were fighting for 200 years ago, people are still fighting for in parts of the world today… I felt really really proud to have a part in telling this story.”