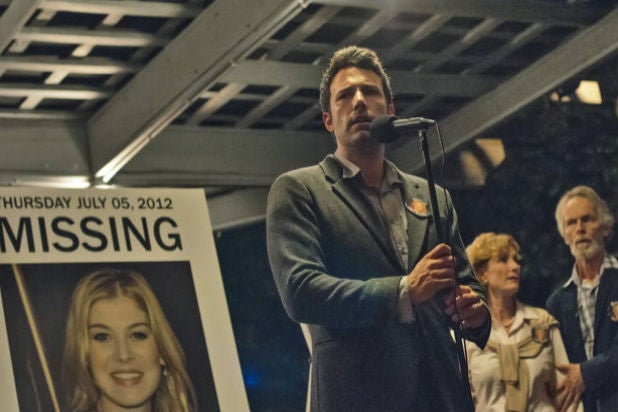 “Gone Girl” doesn’t hit theaters until Oct. 3, and it’s already one of the best reviewed movies of the fall.

The David Fincher thriller based on a Gillian Flynn novel of the same name has wowed most critics so far, garnering an 87 percent approval rating on Rotten Tomatoes.

TheWrap‘s own James Rocchi called the movie both “wicked and wickedly funny” in a review praising everything from the writing to the performances to the cinematography.

“Not only brutal but also brutally funny, ‘Gone Girl’ mixes top-notch suspenseful storytelling with the kind of razor-edged wit that slashes so quick and clean you’re still watching the blade go past before you notice you’re bleeding,” Rocchi wrote. “‘Gone Girl’ will earn plenty of loud shouts of applause, awed sounds of surprise, and shocked laughter, but what makes it worthy of them is all the hushed, uneasy conversations it’s guaranteed to inspire in the long, unsettled silence to come after.”

The film stars Ben Affleck as a man whose life comes under intense media scrutiny when his wife, played by Rosamund Pike, goes missing and the world begins to suspect he killed her.

“Superbly cast from the two at the top to the smallest speaking parts, impeccably directed by Fincher and crafted by his regular team to within an inch of its life, ‘Gone Girl’ shows the remarkable things that can happen when filmmaker and material are this well matched,” Turan wrote.

Rolling Stone critic Peter Travers expects audiences to “stampede” to theaters to see the drama he gave 3.5 out of 4 stars.

“David Fincher‘s shockingly good film version of ‘Gone Girl’ is the date-night movie of the decade for couples who dream of destroying one another. Expect a stampede at the box office,” Travers wrote. “‘Gone Girl’ is a movie of its cultural moment, an era when divorce won’t cut it if there are options for lethal revenge and aggravated assault. In the toxic marriage of Nick Dunne (Affleck) and Amy Elliott (Pike), both partners are equal-opportunity liars and cheats. Or almost equal. Arguments between the sexes are going to be heated.”

Although Village Voice critic Stephanie Zacharek thought the film was “too slick” for its own good, she could not deny that there’s still a lot for audiences to marvel at, including Affleck’s performance.

“The movie, while entertaining and extremely well crafted, is too self-conscious about its depravity to be either truly disturbing or disturbingly funny. Ticking along with metronome-like efficiency, it’s more slick than sick,” Zacharek wrote. “‘Gone Girl’ is fun while it lasts. And if you go to the movies to admire performances and craftsmanship, there’s plenty to go around: Affleck’s Nick is a roiling blob of rage locked in a man’s skin. He struts through the movie like an Abercrombie & Fitch caveman — his shirts are all a little bit too tight, as if they can barely contain his muscles.”

But like all films adapted from another medium, there are critics who can’t help themselves from lamenting about Flynn’s best-selling book being better, and BuzzFeed‘s Alison Willmore is one of them.

“Fincher directs ‘Gone Girl’ with a glossy elegance — the coolness of his touch as a director lends itself well to this story of unlikable people. But the end result is a movie that’s closer to his stylish but hollow ‘The Girl With the Dragon Tattoo’ than with his more virtuoso work like ‘Fight Club,'” Willmore wrote. “It’s not just that ‘Gone Girl’ lacks the conviction of its own nastiness — it’s simply not the toxic soulmate saga that its source material is, a brilliantly cynical take on what it means to put effort into your relationship. Instead, ‘Gone Girl’ feels more like the story of someone who’s gotten involved with a sociopath.”