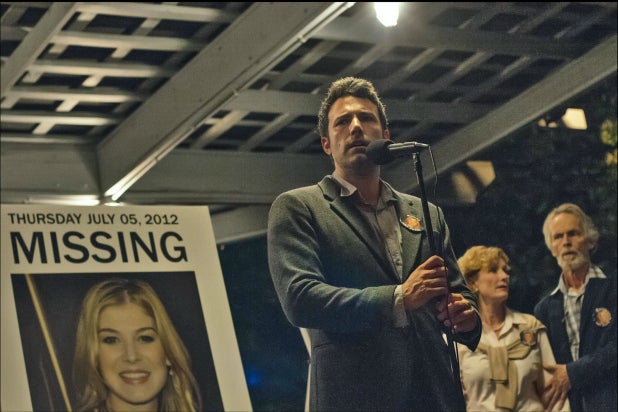 Even with the well-established praise for director David Fincher as a master filmmaker — his movies lushly drenched in shadow, his capacity for tough stuff matched only by his care in presentation — it’s easy to forget or overlook his sense of humor, the spoonful of sugar that helps the malevolence go down in his films.

At his best, Fincher has a sense of humor that not only cuts through the darkness but actually contrasts it to significant effect. After the dour, sour, sadistic Scandanavian misfire of “The Girl With the Dragon Tattoo,” it’s a pleasure to note that Fincher’s latest adaptation, of Gillian Flynn’s best-selling novel of the same name, is both wicked and wickedly fun.

Not only brutal but also brutally funny, “Gone Girl” mixes top-notch suspenseful storytelling with the kind of razor-edged wit that slashes so quick and clean you’re still watching the blade go past before you notice you’re bleeding.

Like some mix of “Scenes from a Marriage” and “Ace in The Hole”  as shot by Michael Mann with a Hitchcock Blonde to kill (or die) for in the lead, “Gone Girl” tells the story of Nick (Ben Affleck) and Amy Dunne (Rosamund Pike). The film begins in New Carthage, Mo., on their fifth anniversary; Nick runs a few errands and blows off some steam, returning home to find an empty house, an upended coffee table shattered in the living room, and no sign of Amy.

When the cops (played by the superb Kim Dickens and a mostly silent but excellent Patrick Fugit) arrive, it’s clear there’s been a struggle inside the Dunne’s house; as Nick and Amy narrate their marriage to us and the police investigate an ever-increasing number of clues, though, it’s clear there were signs of struggle inside the Dunne’s marriage as well.

Made up of police inquiries and diary entries, love stories and other fake-outs, “Gone Girl” is, in no small part, a story about storytelling and the difference between perception and reality, with comforting tales interrupted by the low, ominous thud of the metaphorical other shoe dropping. Amy’s mom and dad are best-selling authors of children’s books, with their series “Amazing Amy” an improved version of their daughter’s life; Nick and Amy’s American dream marriage with the big house and the big love looks is utterly perfect until you shake it and the rot comes spilling out.

And when upsetting revelations come out in the case, celebrity defense attorney Tanner Bolt (Tyler Perry, a natural as a hearty, likable cynic with great media presence) smoothly states how “We’ll have to … realign the public’s perception …”

Flynn’s script is loaded with nicely-tuned observations, not just about the rules and rituals of the modern American marriage but also about a media that shrieks speculation more than it speaks the truth and worries about slogans more than facts. The author’s clever, cruel and cool work also gives Pike the role of a lifetime in the shining, secretive Amy, while still making her human and comprehensible. Affleck, who’s personally had to endure a level of media scrutiny that makes a colonoscopy look dignified, brings much of that history to Nick’s affability and desire to please. When he needs to play the part, Nick does, but he’s not as smart as he thinks he is. Both performers are brilliant.

With its shifting perspectives and timelines, its constant conflict between what’s said and what’s truly seen, “Gone Girl” is clean, clear, and perfectly constructed. Cinematographer Jeff Cronenweth and editor Jeff Baxter, both regular Fincher collaborators, deliver the kind of work that looks easy but, assuredly and on reflection, is decidedly not. The score, by Trent Reznor and Atticus Ross, is a more mixed proposition, effective in the places it works and distracting on several occasions where it doesn’t.

The supporting cast is a thing of wonder — there are familiar faces like Dickens, Fugit, and Perry all pushed to greatness, with Missi Pyle perfect as the film’s version of harridan-for-justice Nancy Grace, Neil Patrick Harris elegantly worrisome as on old suitor of Amy’s, and Carrie Coon (“The Leftovers”) a revelation as Nick’s loving, tough sister Margot.

The best Hitchcock films struck a balance between elegance and violence, a peculiar mix of champagne fizz and spilled crimson blood; “Gone Girl,” with its giddy revelations and grim-grin reversals incorporating ugly facts and uglier fictions, fits perfectly into a modernized version of that superb tradition.

“Gone Girl” portrays marriage not just as warfare by other means but as many different kinds of battle — class conflict, sexual gamesmanship, wrangling over money, fighting over the future — with plenty of blood spilled. That’s part of what makes it as damned good as it is; “Gone Girl” is that rare entertainment that rewards your intelligence instead of insulting it, that rare thriller interested in emotional wounds as much as physical ones.

“Gone Girl” will earn plenty of loud shouts of applause, awed sounds of surprise, and shocked laughter, but what makes it worthy of them is all the hushed, uneasy conversations it’s guaranteed to inspire in the long, unsettled silence to come after.