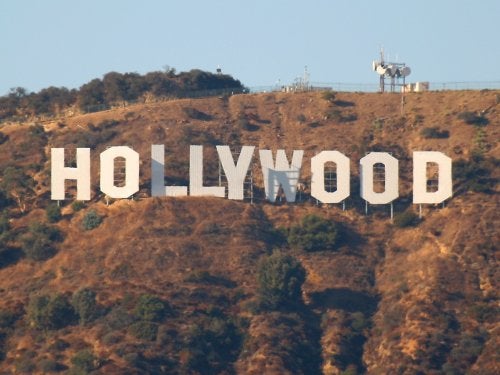 Another day goes by, another deadline missed. The Hollywood sign remains uncovered. No word yet if the Trust for Public Land has been able to cut through the remaining red tape and will be able go forward with their plans to cover up the beloved icon.

Plans to cover the Hollywood sign by the Trust for Public Land are in a holding pattern, even though the rain storm that shook Los Angeles for much of Tuesday broke into a brilliant, sunshine streaked day early Wednesday.

The group is still awaiting final sign off from city officials and the Hollywood Sign Trust before it can proceed with plans to cover the 450-foot landmark. It hopes that it will be able to blanket the sign today or by Thursday at the latest. Initial plans called for having the sign covered by a banner from Tuesday through next Monday.

"Keep an eye an eye on it, you’ll know when you can’t see it anymore," Sam Hodder, director of The Trust for Public Land’s California office, told TheWrap.

"Our website is up, and we’re hoping that enough people go online and donate, in however small an amount, so someday, everyone who cares about Los Angeles and urban land conservation can look out at the ridgeline and say, ‘that’s my mountain,’" Hodder added.

If the rain that blanketed Los Angeles for much of Tuesday ever stops, the iconic Hollywood sign stands to get a lot less visible.

The Trust for Public Land, a land conservation group, is scheduled to mask the Tinseltown symbol on Wednesday with a banner reading "Save the Peak" — weather permitting.

It’s part of an effort to raise awareness for its campaign to buy up 138 acres of land that surrounds the sign’s location on Cahuenga Peak.

The trust hopes to prevent real-estate development of the area, which it argues would obscure the view of the sign and adversely impact the environment.

The parcel of land that the group hopes to buy was sold by the estate of Howard Hughes to Fox River Financial Resources eight years ago. Fox River subsequently put the land up for sale two years ago, but has agreed to lower its $22 million asking price if the trust can raise $12 million by April 15.

Thus far, the group has raised over $6 million, and it hopes the extra publicity will give its efforts the kick it needs to cross the finish line.

The sign will be in place through next Monday, something the trust was able to arrange with permission through the Hollywood Sign Trust and the City of Los Angeles. The campaign has attracted various celebrities to its cause including Virginia Madsen,Julian McMahon, Tippi Hedren, and Julia-Louis Dreyfus.

If successful, the group plans to donate the land to Griffith Park.