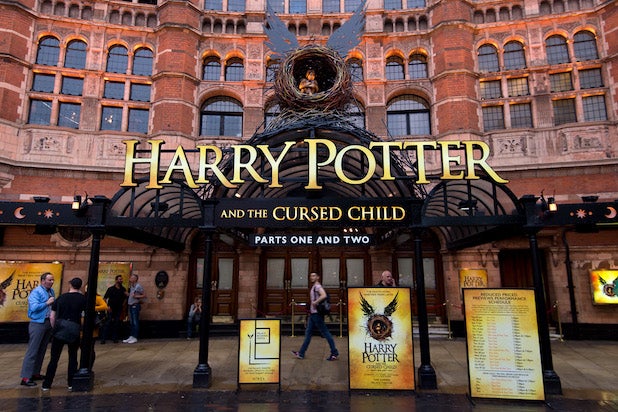 J.K. Rowling‘s much-anticipated “Harry Potter and the Cursed Child” West End play opened for previews on Monday and critics have flocked to the Palace Theatre London to see how this latest live installment stacks up to the famed Harry Potter films.

Theater-goers are handed badges reading “Keep the secrets” as they leave the show, which hints at the lengths the creators are going to keep spoilers under wraps.

Also Read: JK Rowling Calls Out 'a Bunch of Racists' Who Complained About Black Hermione

While they’ve all been careful not to let anything spill in fear of having a hex placed on them, critics have unanimously agreed that “Harry Potter and the Cursed Child” is magical. Directed by John Tiffany and based on an original story by Jack Thorne, the play is set when the seventh film left off as Harry (now 37) and Ginny, accompanied by Ron and Hermione, watch as their offspring set off from King’s Cross for a new term at Hogwarts.

Those used to the Hollywood special affects that brought the school of witchcraft and wizardry to life won’t be disappointed by the work of in-house illusionist Jamie Harrison, who as the conventionally-dressed kids magically acquire school uniforms.

Read some of the reviews below:

Ben Brantley, New York Times
“This production captures Ms. Rowling’s sensibility even more persuasively than did the special-effects-driven films. True, the movies were blessed with an unmatchable stable of idiosyncratic British character actors like Alan Rickman and Maggie Smith and, as Voldemort, Ralph Fiennes (now safely ensconced across town at the Almeida Theater, embodying another avatar of evil, Richard III). But in ‘The Cursed Child,’ everyone onstage has direct, present-tense responsibility for the story being told. And most of them play many parts.”

James Hibberd, Entertainment Weekly
“Author J.K. Rowling, working with London theatre veterans Jack Thorne and John Tiffany, have delivered a production that’s as spectacular as it is ambitious, stuffed with special effects and twists that had a preview audience gasping, ‘Cursed Child’ is a story that doesn’t play it safe with the Potter canon and will change how fans see certain favorite characters forever.”

Elysa Gardner, USA Today
“But whatever change transpires in ‘Cursed Child’ — by playwright Jack Thorne, working from an original story co-written with Rowling and the play’s director, John Tiffany — is far less essential than what has remained. That would be the smashing storytelling and layered but accessible emotional life that always fueled Harry’s saga, whatever feats of magic accompanied them on the page or screen.

Mark Shenton, The Stage
“I can happily shout out from the rooftops of the Palace Theatre — of all the theatres in the West End the one that most resembles Hogwarts — that this is a major work in its own right, with an entirely distinctive theatrical life and shape.

It earns its place on the stage, feeling distinct from both the books and the screen adaptations. By turns playful and gripping, disturbing and detailed, poignant and powerful, it is superb family entertainment.”

Michael Billington, The Guardian
“Anthony Boyle as a wonderfully quirky Scorpius and Sam Clemmett as the Oedipal Albus carry the bulk of the story and even hint at something stronger than friendship. Jamie Parker as the adult Harry is a suitably distraught figure haunted by the death-count he has caused and Noma Dumezweni, as an authoritative Hermione who is now Minister of Magic, and Paul Thornley, as a bluntly commonsensical Ron, suggest a couple bonded by love.”

Kasia Delgado, RadioTimes
“It’s hard to know what exactly Rowling, Thorne and Tiffany intended with this play — but it feels like a thoughtful tribute to Harry Potter rather than an extension of the Hogwarts world. If you go to the Palace Theatre hoping for explanations of plot mysteries in the books and exciting revelations about characters’ pasts, you might be left disappointed. ‘The Cursed Child’ doesn’t add huge amounts to the Potter universe but is more a magical, memorable ode to a series of books which made the literary lives of 90s kids so sensational.”

Henry Hitchings, Evening Standard
“Occasionally the script works too hard to avert the nitpicking of the books’ most fanatical admirers. Yet if explaining the story’s more ticklish details sometimes stalls its momentum, the characterisation is richly convincing. Jamie Parker makes a studious and likeable Harry, Paul Thornley’s Ron has an effortless goofy appeal, and Noma Dumezweni brings a sober authority to Hermione. But of all the performances the most layered and absorbing comes from relative newcomer Anthony Boyle as Scorpius, who’s surely set to be a fan favorite.”