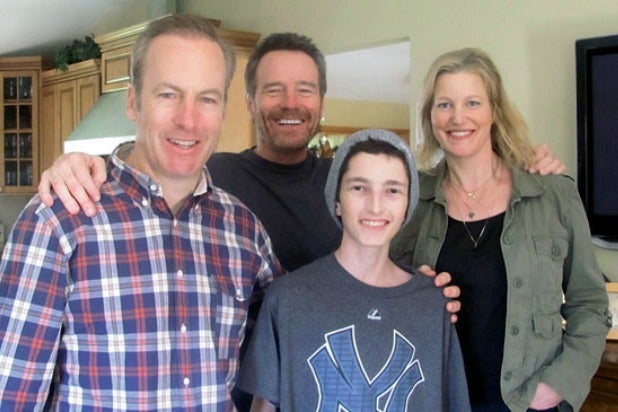 The biggest twist on Sunday’s “Breaking Bad” — a moment that brought Walter White out of pathetic, snowbound retirement — came courtesy of a 16-year-old boy who died of cancer in the spring.

Kevin Cordasco was a huge fan of the show, and its cast and creator, Vince Gilligan, visited him as he neared the end of a six-year-battle with neuroblastoma. The first of the show’s final eight episodes was dedicated to him.

Gilligan once offered to tell Cordasco how “Breaking Bad” would end, and the teen turned him down — because he planned to live to see it himself.

Sadly, he didn’t. But he did contribute one of the its most crucial plot developments.

Also read: ‘Breaking Bad’ Up for Auction: You Can Own Walter White’s Tighty-Whiteys

Gilligan added: “I can’t promise you you will ever get your complete knowledge of that situation to your total satisfaction, but the very fact that Kevin mentioned Gretchen and Elliott led us — the writers and I — to reintroduce them, reincorporate them into the story.”

In the final scene of Sunday’s episode, “Granite State,” Walt is sitting in a New Hampshire bar, about to turn himself in, when he sees his former business partners, Elliott and Gretchen Schwartz, being interviewed on television by Charlie Rose. When they say Walt contributed nearly nothing to their success, he is so outraged at being slighted yet again that he decides to return to New Mexico.

“It works as a catalyst,” Bryan Cranston, who plays Walt, said on the podcast.

“Walt seems to change his mind there,” added Peter Gould, who wrote and directed the episode. “He’s all ready to get caught, and then he sees the video…”

We’ve all heard the story about Babe Ruth promising to hit a home run for a sick boy in the hospital. The “Breaking Bad” version is a little different: It involves Walt going back to Albuquerque, armed with an M60 and a pocketful of ricin.