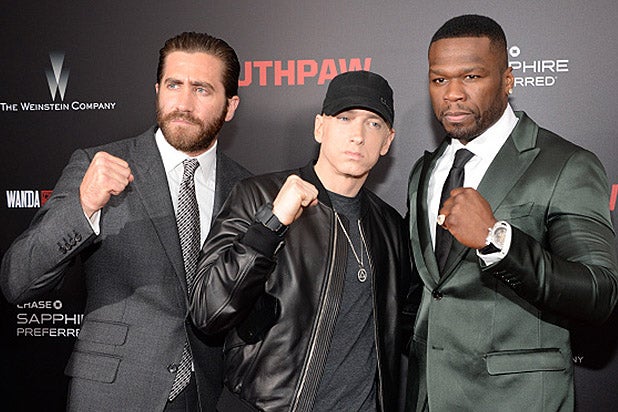 Eminem, 50 Cent, Gwen Stefani and TheWeeknd appear to have helped the Jake Gyllenhaal boxing drama “Southpaw”connect at the box office with a $16.7 million weekend debut.

The youth, gender and minority-heavy makeup of the Antoine Fuqua-directed film’s audience were unusual for the Weinsein Company. Its films are typically awards bait and artier fare like Best Picture Oscar winners “The King’s Speech” and “The Artist,” or April’s Helen Mirren drama “Woman in Gold,” which was its last release.

Sixty percent of the “Southpaw” crowd was under 30, the gender split was even, while 24 percent of the audience was Hispanic and 21 percent African-American. Some of that is probably attributable to the film’s soundtrack, which features rappers and music acts, whose fan base audiences skew young.

“Eminem and 50 Cent, Antoine shooting a great movie and a terrific performance by Jake” were cited by TWC’s distribution chief Eric Lomis as reasons for the success of the film, which co-stars Forest Whitaker and Rachel McAdams.

50 Cent and Eminem also helped heavily promote the film. The “Get Rich or Die Tryin'” rapper spent the past few weeks doing television, radio and online interviews amid his bankruptcy filing and sex tape court case in New York. And Eminem has been plugging the drama on his Twitter account, urging his 19.6 million followers to see the movie and buy the soundtrack.

Meanwhile, TWC chief Harvey Weinstein liked Gyllenhaal’s performance so much that he predicted an Oscar nomination for the actor, who many thought was snubbed after his standout performance in “Nightcrawler” last year, while previewing the film in March at the Cannes Film Festival.

Weinstein knows how to sell a movie, so it may have been more marketing ploy than awards analysis. If so, it worked. “Southpaw” scored a hit with opening weekend audiences, who gave it an “A” Cinemascore and were very positive in TWC’s exit polls, according to Lomis.

Roughly $17 million is a good start, but far from a blockbuster haul. Still, it didn’t have a blockbuster-sized budget either, with the film costing about $25 million after tax credits. And given the likely positive word of mouth based on the exit polls and CinemaScore, “Southpaw” should be able to build on that number.

“I think we’re going to be around for awhile because of the word of mouth and the fact that we’re a drama in the middle of summer,” said Lomis. “It can’t be all superhero stuff and comedies, and I think we provide something for grownups.”