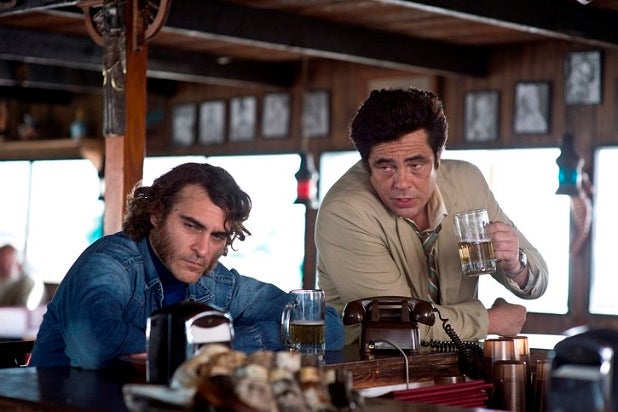 The Paul Thomas Anderson crime caper “Inherent Vice” blew away the specialty box office this weekend, taking in $330,000 from five theaters for a $66,000 per-screen average in its limited debut for Warner Bros.

Elsewhere, Reese Witherspoon’s “Wild” broke into the top ten in its second week for Fox Searchlight and “The Imitation Game” posted an impressive third-week expansion for the Weinstein Company, as several awards contenders appeared to benefit from Golden Globes nominations.

“Inherent Vice” is Anderson’s first film since “The Master.” That one was even bigger in its initial rollout, averaging $147,262 on five screens in its September 2012 opening.

Warner Bros. plans to go nationwide with “Inherent Vice,” which premiered at the New York Film Festival, on January 9.

Fox Searchlight added 95 theaters for “Wild” in its second week, and the survival drama cracked the top ten nationally with $1.6 million from 116 screens. That’s a $13,945 per-screen average for the film, which co-stars Laura Dern and is directed by Jean-Marc Vallee.

“The Imitation Game” had an even-better $34,125 per-screen average after TWC went from eight to 27 theaters for its third week. The drama, in which Benedict Cumberbatch stars as British cryptologist Alan Turing, brought in $921,000 from 27 theaters to lift is domestic total to $2 million.

The Stephen Hawking biopic “The Theory of Everything” wound up ninth on the national chart after taking in $2.5 million from 1,220 theaters, a per-theater average of $2,070. That lifted the domestic total for the Focus Features drama starring Eddie Redmayne and Felicity Jones to $17.1 million after six weeks.

Searchlight’s “Birdman” was up 15 percent from the previous week despite losing 132 screens. The black comedy directed by Alejandro Inarritu and starring Michael Keaton brought in $1.3 million from 606 theaters for a per-screen average of $2,186. Its domestic total is now $20.7 million after nine weeks.