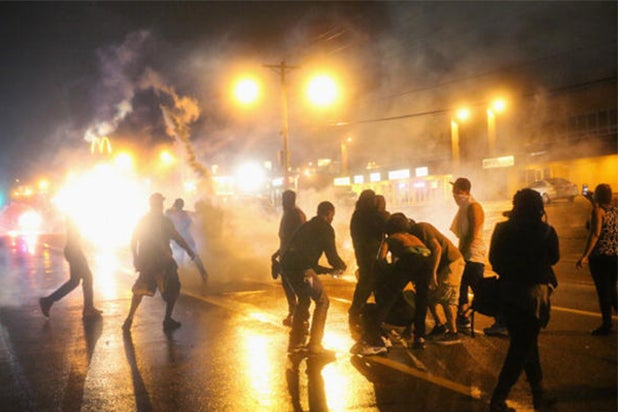 A reporter for Glenn Greenwald’s news agency, the Intercept, is the latest to be targeted by police in Ferguson, Mo.

Greenwald co-created the Intercept to report on documents released by NSA whistleblower Edward Snowden, with the longer-term goal of producing “fearless, adversarial journalism across a wide range of issues,” according to the Intercept website. It had no trouble running into adversarial treatment from police in the small town near St. Louis, where protests over the death of unarmed black teen Michael Brown have entered their second week.

Intercept editor-in-chief John Cook said a St. Louis County police tactical team shot reporter Ryan Devereaux in the back with a non-lethal projectile and subsequently arrested him while his hands were raised in the air as he shouted, “Press! Press! Press!”

Cook said the police also shot Lukas Hermsmeier, a German reporter for De Bild, with a projectile and arrested him.

Late Monday, police shoved and tear gassed CNN’s Don Lemon and . Last week, officers fired tear gas toward an Al Jazeera America news crew. They also arrested reporters from The Washington Post and Huffington Post who failed to leave a McDonald’s as soon as they were ordered out.

Police in Ferguson have been accused of overreacting to a few attacks by a small minority of demonstrators by firing tear gas at demonstrators and reporters alike. The violence has not subsided, even as the job of patrolling the demonstrations has transitioned from local police to state officials to the National Guard. (A summary by TheWrap of the attacks on the press can be found here.)

Cook noted that President Barack Obama said Monday that “police should not be arresting journalists for doing their jobs. “

“Devereaux was doing his job, presented a threat to no one, and clearly identified himself as a member of the press,” Cook said. “The behavior of the law enforcement organizations operating in Ferguson has been, among other things, utterly contrary to the constitutional principle of a free press, and corrosive of its crucial role in maintaining an open and democratic society.”

A St. Louis County police spokesman did not answer calls for comment, and his voicemail was full.