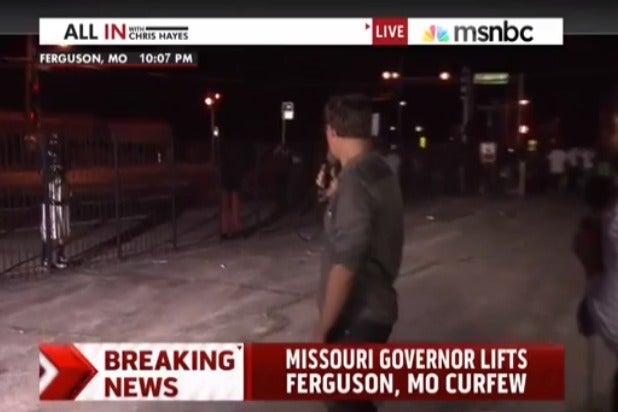 Protestors in Ferguson, Mo., threw rocks at MSNBC’s Chris Hayes as he reported live Monday, but he managed to turn the incident into a friendly interview.

It was another bad night in Ferguson — including for journalists — as protests over the death of unarmed black teenager Michael Brown entered their second week. CNN’s Don Lemon and Jake Tapper were shoved by police and had to flee from tear gas. A Getty Images photographer was arrested.

“Tell the true story!” one demonstrator yelled at Hayes after the rock-throwing.

Hayes spoke with one masked man demonstrator who stopped at a gate separating him from the news crew. The man did not appear to have been one of the people who threw rocks.

“The gentleman in the mask behind me is telling me that this is a Civil Rights movement, it’s not just about Mike Brown, it’s about all people,” Hayes said.

President Obama took to the airwaves before the demonstrations Monday urging police to respect freedom of speech and the press. Last week, an Al Jazeera crew was hit with gas, and two reporters were detained for not leaving a McDonald’s as fast as police wanted them to.