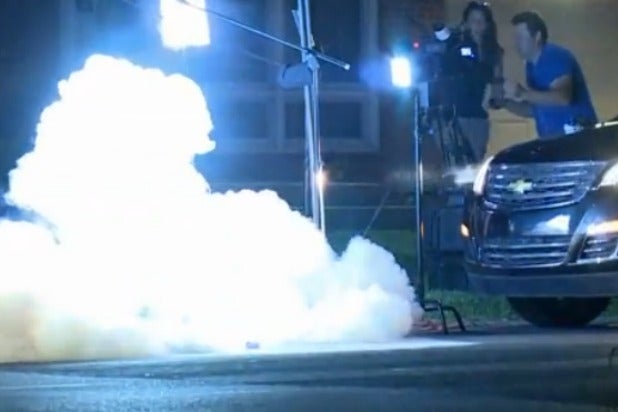 Raw video shows an Al Jazeera America news crew covering the Ferguson, Mo., protests being hit with tear gas. After they fled, a SWAT team pulled up to dismantle their equipment.

The footage has become a rallying point for Al Jazeera and others who accuse police of trying to silence news media — but one police department says it was not the attack on the press that it appears to be.

The St. Charles County Sheriff’s Department, which operates the SWAT team, said it was not the agency that fired the tear gas Wednesday night, but confirmed it took down the abandoned lighting equipment because it made it difficult for officers to see. The department’s Lt. David Tiefenbrunn told TheWrap that the SWAT team later helped the reporters out of the area, and reunited them with their equipment.

He said he did not know which of the police departments in the area fired the gas, but that he did not believe the reporters were targeted.

“I’m sure that when they did deploy that, they were unaware that there were media there,” he said, adding that bright lights hindered visibility in an already confusing situation.

The St. Louis County Police department has covered the protests with help from other agencies, and did not answer calls for comment Thursday.

More than a dozen people were taken into custody Wednesday night as demonstrators took to the streets demanding justice in the police shooting of Michael Brown, an unarmed African-American teenager who was about to begin college. Police have been accused of making a bad situation worse by overreacting to peaceful demonstrations.

The tear gassing came at the end of a day in which two reporters were also detained for not leaving a McDonald’s fast enough for police who arrived to close it down. The reporters, from the Huffington Post and Washington Post, were released without any charges being filed.

Al-Jazeera released a statement Thursday accusing police of an “egregious assault on freedom of the press that was clearly intended to have a chilling effect on our ability to cover this important story.” Asked about Tiefenbrunn’s account, the network confirmed that one department eventually came to the aid of its crew.

But cameraman Sam Winslade, one of the three members of the crew, told TheWrap that the officers only delivered them to safety after initially pointing guns at them.

“We were fired at from a police MRAP (police armored personnel carrier) vehicle,” he said of the tear gassing. He added that his crew then fled and “sought shelter between houses.”

Eventually a separate MRAP — apparently the one from the St. Charles SWAT team — pulled up.

“As that vehicle came close we (as a group of 3) yelled out to the MRAP we were press and we approached the vehicle with hands visible,” Winslade said. “They opened the back of the vehicle and ordered us inside. Whilst the doors were open and we were outside — I do recall seeing ‘SWAT type’ firearms pointed at us. We were helped aboard, and taken back to our vehicle.”

St. Louis station KDSK captured the tear gassing on video, and continued recording as the St. Charles police took down the Al Jazeera team’s equipment. Tiefenbrunn said he had contacted KDSK to clarify that his department did not tear gas the journalists, and helped them to safety.

The video shows that the Al Jazeera journalists did not appear to be close to demonstrators — or anyone else — when they were tear-gassed. Al Jazeera said law enforcement agencies were well aware that its reporters were covering the story.

“Last night at 10:30pm CD in Ferguson, Missouri, an Al Jazeera America news crew was reporting behind police barricades. They were easily identifiable as a working television crew,” the network said. “As they were setting up their camera for a live report, tear gas canisters landed in their proximity and police fired rubber bullets in their direction. Police continued to shoot after crew members clearly and repeatedly shouted ‘Press.'”

“We were very surprised by this, we had been there for about an hour,” Quraishi said in a statement. “We had been in contact with police officers who were just feet away from us. I had spoken to police officers who knew we were there. We had had discussions with them. We understood this was as far as we could get in terms of where the protest was going on, about a mile up the road. So, we didn’t think there would be any problems here so we were very surprised.”