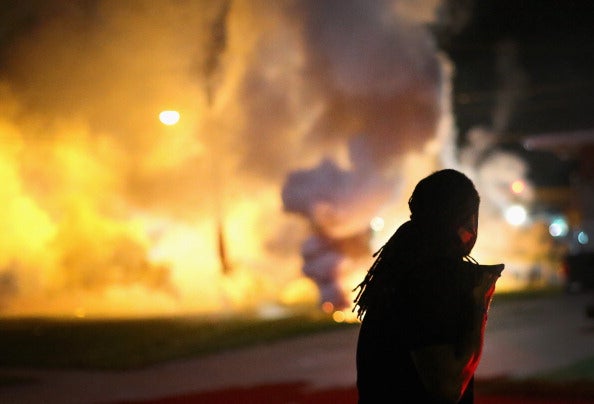 (Update: A spokesman for the St. Charles County Sheriff’s Department tells TheWrap his agency did not fire the tear gas, and aided the Al Jazeera reporters. He also says he does not believe the reporters were targeted intentionally.)

Al Jazeera America is accusing police in Ferguson, Mo., of an “egregious assault on freedom of the press,” saying its reporters were targeted while covering a demonstration of the police shooting of unarmed black teenager Michael Brown.

The reporters were among those covering a nighttime demonstration in which police fired tear gas at apparently peaceful demonstrators. (Photo, above.)

Earlier in the day, police had detained reporters from the Huffington Post and the Washington Post who were covering the protests from a Ferguson McDonald’s, and didn’t leave fast enough for police. The two reporters were released without being charged.

“Last night at 10:30pm CT in Ferguson, Missouri, an Al Jazeera America news crew was reporting behind police barricades. They were easily identifiable as a working television crew,” Al Jazeera America said in a statement Thursday. “As they were setting up their camera for a live report, tear gas canisters landed in their proximity and police fired rubber bullets in their direction. Police continued to shoot after crew members clearly and repeatedly shouted ‘Press.'”

The statement continued: “Al Jazeera America is stunned by this egregious assault on freedom of the press that was clearly intended to have a chilling effect on our ability to cover this important story. Thankfully all three crew members are physically fine. We believe that this situation must be investigated along with those involving our colleagues at other media outlets.”

St. Louis County Police referred calls to a spokesman did not answer calls Thursday morning, and his voicemail was full.