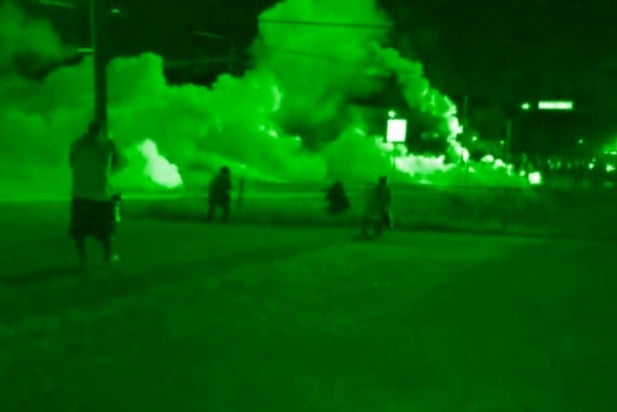 A reporter covering the Ferguson, Mo., demonstrations over the death of unarmed black teenager Michael Brown posted a 25-minute video of police firing tear gas on demonstrators and driving them through a residential neighborhood.

The video from KARG Argus radio has added to widespread complaints that police are making a bad situation worse by overreacting to demonstrators who demand justice and the name of the officer who shot Brown, who was to have started college Monday.

St. Louis County Police referred calls to a spokesman did not answer calls Thursday morning, and his voicemail was full.

The video is jarring and chaotic. The protestors’ frustration is obvious even before the tear gas — they sing about revolution and ignore commands to disperse — but there are no signs of violence. The frustration turns to shock when the gassing begins.

The video begins with the demonstrators chanting, “What do we want? Justice.” At the 2:15 mark, an amplified voice commands, “Please turn off –” followed by something indecipherable. The protestors say the order was for the assembled reporters to turn off their cameras.

“They aren’t turning off no damn cameras, bitch,” one man says into a bullhorn.

Another adds: “They’re telling the media to turn off their cameras because they don’t want no fuckin’ witnesses.”

Four minutes into the video, police give what they say is a final warning to disperse. At the six-minute mark, they use sound cannons emitting piercing noise.At the 7:30 mark, one man among the demonstrators dons a gas mask and helmet. As the police line approaches, demonstrators raise their arms to show they are peaceful. Nine minutes into the video, sparks and smoke erupt, filling the streets.

A woman yells, “Fucking stop throwing stuff at them!,” but it is unclear whether she is yelling at protestors or police. Others yell that they are only peacefully protesting, a constitutional right.

Police have asked protestors to demonstrate only during daylight. But the tear gas followed a day in which police also shut down a local McDonald’s, detaining two reporters in the process. A St. Louis alderman was also jailed Wednesday night and released Thursday morning.

The alderman, Antonio French, told the St. Louis Post-Dispatch that the “heavy-handed” approach was making matters worse. He said neither he nor at least a dozen others taken into custody should have been.

“Inside that jail is nothing but peacekeepers,” he said. “They rounded up the wrong people … reverends, young people organizing the peace effort.”