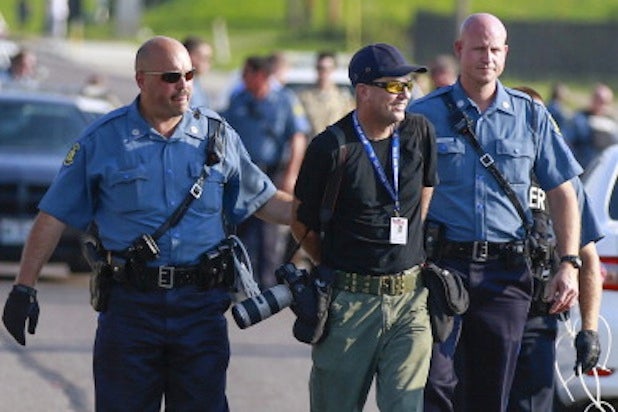 The protests in Ferguson, Missouri, appear to be far from over. But President Obama and several news organizations say the heavy-handed treatment of journalists covering the unrest must stop, now.

Shortly after the fatal police shooting of unarmed African-American teenager Michael Brown on Aug. 9, journalists from around the  world began to converge on the St. Louis suburb. As reporters and photographers arrived in increasing numbers, some were arrested. Others said they were assaulted by local officers, a policeman reportedly threatened to shoot one reporter, and a CNN anchor was shoved by police on live television. Multiple journalists were also caught in the line of fire as tear gas canisters and stun grenades were launched at protesters.

Also read: Obama: Freedom of Press and Assembly Must Be ‘Vigilantly Safeguarded’ in Ferguson

By Monday, Aug. 18, the media had been relegated to a specific corner on West Florissant Ave., and told they needed to stay there, or face possible arrest. A Getty Images photographer who strayed from the corner, purportedly moving across the street, was taken into custody.  CNN anchor-reporter, Don Lemon was also shoved by an officer on Monday as he did a live report.

Here’s a timeline of incidents involving the police and press in Ferguson:

Wednesday, Aug. 13, 2014
Ryan Reilly, a reporter with the Huffington Post, and Wesley Lowery of the Washington Post were arrested while working on stories about the protests at a McDonald’s in Ferguson. The two were taken into custody for “not leaving fast enough” after police ordered everyone out of the restaurant. Shortly after the arrests, they were released without being charged.

Lowery recounted his arrest, alleging that he was “slammed … into a soda machine,” by officers who told him he was resisting arrest, even as he verbally told them he was complying.

Reilly claimed he was also assaulted — saying the officer who arrested him slammed his head on a door, while sarcastically apologizing and ignoring multiple requests for his name or badge number.

At 10:30 that night, Al Jazeera America accused local police in Ferguson of an “egregious assault on freedom of the press,” saying its news crew was targeted with tear gas and rubber bullets.

Sunday, Aug. 17, 2014
Police detained three reporters and threatened to shoot and mace others, according to KARG Argus Radio, a public station that said its reporter Mustafa Hussein was among those who were threatened.

Monday, Aug. 18, 2014
CNN anchor-reporter Don Lemon and several protesters were shoved by police and told to move, as Lemon did a live report in Ferguson. Lemon said he was simply doing his job after being instructed by local authorities to stand at that location on the sidewalk. “We’re on national television,” he said. “Imagine what they’re doing to people you don’t see on television.”

Also Monday, a photographer from Getty Images was detained after leaving the corner of West Florissant Ave., where the media was ordered to stay. His arrest was captured on video and posted to Instagram by journalist Amy K. Nelson. He was released a short time later.

Just before midnight, during CNN’s live coverage, police began launching stun grenades and canisters of tear gas toward the protesters, and near CNN’s coverage team. While continuing to broadcast, Jake Tapper and Don Lemon had the team move away from the escalating situation, capturing one photographer on film who’d been incapacitated by the tear gas.

Earlier in the day, President Barack Obama told reporters freedoms of assembly and the press must be “vigilantly safeguarded” in Ferguson.

SAG-AFTRA, the union representing some of the nation’s on-air talent, also released a statement denouncing the treatment of reporters in Ferguson. “Journalists have an obligation to report what is happening in their community, and the world,” the organization said in a statement. “We ask that law enforcement in Ferguson permit journalists the freedom to do their jobs.”