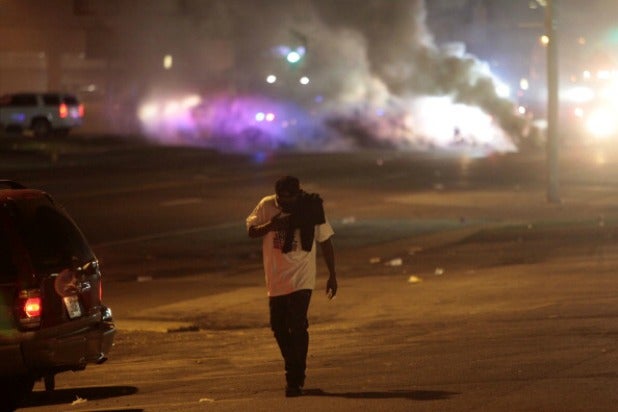 Missouri Gov. Jay Nixon ordered the state’s National Guard into the embattled town of Ferguson after another night of violence as protestors demand justice for Michael Brown, an unarmed black teenager shot by a police officer.

Nixon’s order Monday morning followed a night in which one person was shot — not by police, officers said — and several were arrested. Also Sunday, a private autopsy found that Brown was shot six times, including once in the top of the head. The report did little to explain why Brown was shot. Police have said he was killed in an altercation while trying to take the gun of the officer who opened fire on him, six-year veteran Darren Wilson.

Police fired tear gas Sunday night after saying they had been fired upon and attacked with Molotov cocktails. Children and reporters were among those hit by police tear gas. Last week, police also fired tear gas at protesters, reporters and others, and detained two journalists working from a McDonald’s for not leaving quickly enough when commanded to do so.

The conflict in the town outside St. Louis has raised questions about police treatment of African-Americans, as well as the militarization of local police forces and limits on press freedoms.

“Tonight, a day of hope, prayers, and peaceful protests was marred by the violent criminal acts of an organized and growing number of individuals, many from outside the community and state, whose actions are putting the residents and businesses of Ferguson at risk,” Nixon said in a statement. “I join the people of Ferguson, and all Missourians, in strongly condemning this criminal activity that included firing upon law enforcement officers, shooting a civilian, throwing Molotov cocktails, looting, and a coordinated attempt to block roads and overrun the Unified Command Center.

“These violent acts are a disservice to the family of Michael Brown and his memory, and to the people of this community who yearn for justice to be served, and to feel safe in their own homes. Given these deliberate, coordinated and intensifying violent attacks on lives and property in Ferguson, I am directing the highly capable men and women of the Missouri National Guard to assist Colonel Ron Replogle and the Unified Command in restoring peace and order to this community.”

The autopsy was conducted by Dr. Michael M. Baden, the former chief medical examiner for the City of New York, who waived his normal fee and flew to Missouri on Sunday at the family’s request. Two other autopsies are also planned, one by local officials and one by the Justice Department.

After the tear gassing and more than a dozen arrests Wednesday, Nixon announced that state officials would supervise the demonstrations rather than local police. Thursday was a night of peaceful, almost celebratory protests.

But over the weekend, violence broke out again. Nixon instituted a mandatory curfew, and after Sunday, riot-gear-clad police who said they were responding to reports of shots fired and firebombs began firing rubber bullets and launching tear gas, the New York Times reported.

Those hit almost immediately began posting images and Vines, including this one of an 8-year-old child who was tear gassed: