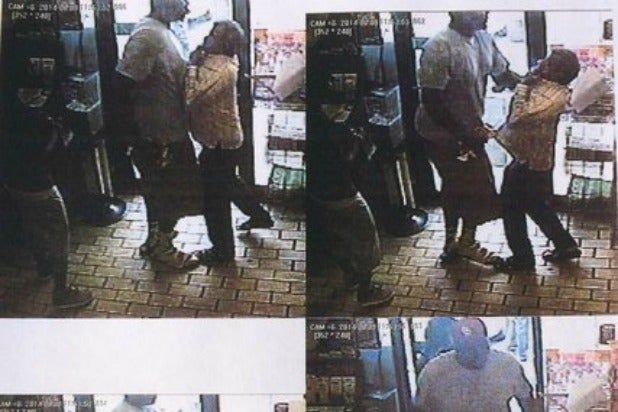 (Updated: Police chief says officer was not aware Brown was a robbery suspect when he stopped him.)

Police in Ferguson, Mo., allege that unarmed teenager Michael Brown robbed a convenience store of cigars before he was shot and killed by a police officer.

In a news conference Friday morning, Ferguson Police Chief Thomas Jackson released the name of the officer who shot Brown on Saturday, as well as an incident report saying the 18-year-old was suspected of committing the robbery just before the shooting. Police also released surveillance images that they said showed Brown towering over a store clerk and shoving him.

Stealing cigars, obviously, is not a crime punishable by shooting. Initially, police seemed to be releasing the images to try to answer one of the big questions since Saturday: Why Brown was stopped in the first place.

But Friday afternoon, the police chief said the officer who shot Brown had no idea Brown was a robbery suspect at the time he was stopped. He said Brown and a friend were stopped “because they were walking down the middle of the street blocking traffic,” NBC News reported.

Police say Brown attempted to take the officer’s gun during an altercation that followed, and that the officer shot him in self-defense.

The chief identified the shooter as six-year veteran Darren Wilson. Jackson said Wilson has had “no disciplinary action” taken against him during his time on the force, and was treated for injuries he suffered on Saturday.

The shooting sparked days and nights of protests in the town near St. Louis, and fueled outrage and disgust at the shooting of yet another unarmed black teenager. Brown, like Trayvon Martin, was presented as a victim of an overzealous attack.

On Wednesday, police arrested more than a dozen people — and detained two journalists who apparently didn’t leave a McDonald’s fast enough for their liking. They also fired tear gas at protesters and reporters.

The atmosphere was much calmer Thursday night after Gov. Jay Nixon put state authorities in charge of monitoring the protests, instead of the local police who handled them previously.