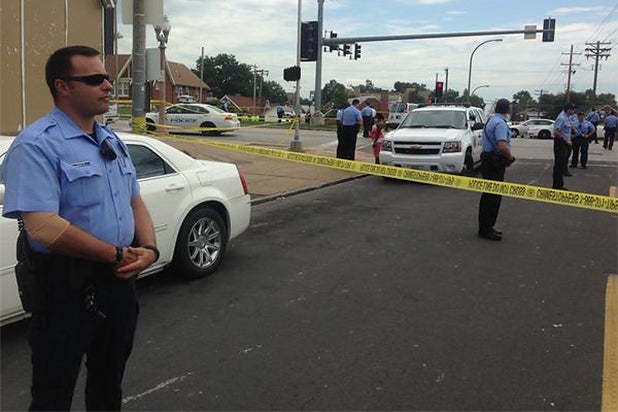 Police in St. Louis shot and killed a robbery suspect Tuesday, just four miles from the ongoing unrest in Ferguson, according to multiple media reports.

St. Louis’ local Fox station Fox 2 Now reports a male suspect wielding a knife while attempting to rob a convenience store was spotted by eyewitnesses, who called the police.

When two officers arrived on the scene, they reportedly warned him multiple times to drop his weapon. But he did not heed the officers’ orders. St. Louis Police Chief Sam Dotson says the suspect also yelled “shoot me now” at the police multiple times, which was backed up by eyewitness reports.

When the suspect approached the officers with the knife “in an attack posture,” both officers opened fire, killing the suspect.

He was pronounced dead at the scene.

The incident occurred at the Six Star Market on McLaran and Riverview, which is just four miles from where Michael Brown was shot and killed by police over a week ago in Ferguson.

The killing of Brown, an unarmed African-American teenager, has sparked outcry and over a week’s worth of sometimes violent and chaotic protests in the streets of Ferguson. The Missouri National Guard has been called in to protect the police command center, which had allegedly become the focus of coordinated attacks from citizens.

The officer who shot and killed Brown, Darren Wilson, has not yet been charged.