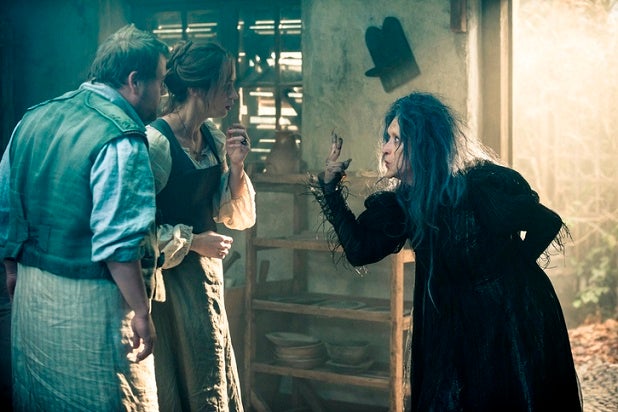 “The Interview” may be the most talked-about movie heading into Christmas Day, but the star-laden Disney musical “Into the Woods,” the Angelina Jolie–directed “Unbroken” and Oscar frontrunner “Selma” lead a holiday parade of eight new movies that could wrest the spotlight this weekend.

With the exception of the blockbuster Peter Jackson epic “The Hobbit: The Battle of the Five Armies,” the holiday box office has been sluggish. But the high-profile releases could turn that around starting Thursday.

Analysts believe the Rob Marshall–directed “Into the Woods” will lead the newcomers, with somewhere around $30 million over the long weekend. If the adaptation of Stephen Sondheim’s Broadway hit surges, it could threaten New Line and MGM’s “The Hobbit,” which they believe will march to $35 million in its second week. “Battle of the Five Armies” has rolled up $378 million at the global box office in less than two weeks.

Universal’s “Unbroken,” a biopic about Olympic and World War II hero Louis Zamperini, could hit $20 million, while the “The Gambler” should finish the long weekend with around $10 million.

No movie has more star wattage than “Into the Woods,” featuring Emily Blunt, Meryl Streep, Anna Kendrick, Chris Pine and Johnny Depp. Director Marshall guided “Chicago” to the Best Picture Oscar in 2002 and helmed the last “Pirates of the Caribbean” movie.

The reviews for “Woods” are good (72 percent positive on Rotten Tomatoes) and it’s been gathering steam on social media in the past few days. Disney will have the $50 million musical in around 2,200 theaters.

Jack O’Connell stars in “Unbroken,” which is based on Laura Hillenbrand’s bestselling novel and was adapted by Joel and Ethan Coen (“No Country for Old Men”), William Nicholson (“Les Misérables”) and Richard LaGravenese (HBO’s “Behind the Candelabra”).

The reviews are so-so (49 percent on Rotten Tomatoes) for “Unbroken,” which has been in the Oscar discussion for Best Picture. Its Facebook profile is significant and it will be in 3,132 theaters on Thursday.

“The Gambler” is directed by Rupert Wyatt (“Rise of the Planet of the Apes”) with a screenplay by William Monahan (“The Departed”). It’s a remake of the 1974 James Toback film of the same name that starred James Caan.

Toback and Monahan are executive producers on the $25 million crime drama, which was produced by Stephen Levinson, Irwin and David Winkler, Robert Charoff and Wahlberg. Universal will have it in 2,478 theaters.

Warner Bros. is launching “American Sniper,” starring Bradley Cooper and Sienna Miller, on four screens. The R-rated drama from Village Roadshow is based on Chris Kyle’s autobiography of the same name and recounts his struggles to be a good father and husband while fighting in Iraq.

The Weinstein Co. is opening Tim Burton’s “Big Eyes” in a surprisingly wide 1,307 theaters. Amy Adams and Christoph Waltz star in the 1960s-set story of the Walter Keane paintings.

Sony will debut the Seth Rogen–James Franco comedy “The Interview” in more than 300 theaters on Thursday. The new rollout reverses the studio’s decision last week to scrap the 3,000-theater nationwide release of the R-rated comedy based on the assassination of North Korean leader Kim Jong-un after terror threats from hackers.

When it was to be rolled out widely, “The Interview” was projected to open to between at $15 million and $20 million by analysts. Now, playing in smaller, independent theaters after the angry major theater chains opted out of the re-worked rollout in a dispute over video on demand, it’s looking at somewhere between $3 million and $4 million if all the media attention translates to box office.