The guy who wrote "Puff the Magic Dragon" says that 2D cinema is dead.

Ordinarily, the opinion of a one-hit songwriter might not matter much in the world of entertainment technology – but in this case, the songwriter who penned the lyrics to Peter, Paul and Mary’s classic at the age of 19 also happens to be the so-called father of 3D cinema, and the closest thing to a rock star that the field has to offer.

Lenny Lipton, the songwriter and 3D guru in question, gave the closing keynote address at Monday’s 3DNext Summit in Culver City, where his status as a 30-year stereoscopic-cinema veteran responsible for a variety of innovations made him the biggest celebrity on the program.

And in contrast to many of those who’d preceded him preaching caution, Lipton was adamant that the future is 3D, and the future is now. 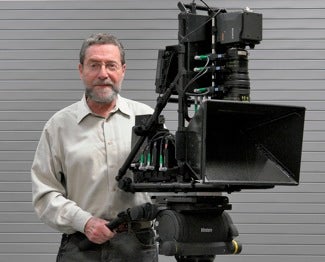 “People won’t admit it, but it’s all over for 2D cinema,” said Lipton, who holds more than 40 patents in the field of stereoscopic cinema and wrote the book “Foundations of Stereoscopic Cinema” in 1982. “And it’s not for creative reasons.  It’s for business reasons.”

Bussinessmen in the entertainment industry, Lipton said, have always embraced “new modalities” that allow them to increase prices. “There are remarkable parallels between the introduction of the sound cinema and the stereoscopic cinema,” he said, displaying a chart that also included the innovations of motion, sound, color, widescreen and stereoscopic

“In every case, exhibitors are able to charge more money. And that’s why 3D cinema isn’t going away.

After stints at the StereoGraphics Corporation, which he founded in 1980, and later at RealD, Lipton has now founded a new company, Oculus3D, which has created a 3D theatrical format that can use 35 mm projectors rather than requiring the more expensive digital projection equipment.

“If I’m right, and stereoscopic cinema becomes ubiquitous, does that mean all the smaller theaters go out of business?” he asked. “They need a solution, and they can’t afford digital.”

Among the other topics Lipton touched on in his half-hour talk:

Cinema, along with photography and other visual arts, has always been three-dimensional. In the past, he pointed out, we got our cues about depth from the placement of objects, from vanishing points and perspective, from relative sizes. “The addition of the stereoscopic depth cue is an evolution rather than an innovation.” 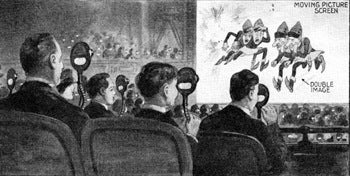 Stereoscopic 3D is not new. Lipton showed a drawing of a 1923 movie theater using the “Teleview” system (left) to create a stereo image when viewed through special lenses – “the exact same idea,” he said, that was applied by Lipton and his colleagues in the early 1980s, and is currently used by systems like RealD.

3D is not more suited to sci-fi and effects-driven movies more than for other types of films. “That’s stupid, stupid, stupid,” he declared. “It’s even better for dramas and comedies.”

The equipment is still a problem. 3D cameras are still “big klutzy things,” and a single-camera solution that does away with the side-by-side lenses or "beam-splitter" rigs is a long way off.

The key lies not in the making of movies, but in their exhibition. “Projection is more important than content,” he said, “because right now, it’s in the hands of thousands and thousands of kids who get paid barely above minimum wage … It’s very important that any product that winds up in a projection booth is routinized, so that it’s easy to use.”

And then, near the end of his talk, Lipton dared to criticize the biggest sacred cow of the entire conference, when he took issue with the array of speakers and panelists who’d held up “Avatar” as the exemplar of quality 3D.

“It’s not true that ‘Avatar’ is the best,” said Lipton, who conceded that animation is an easier and, for now, better medium for 3D. “I just saw the new ‘Shrek,’ and that is more beautiful and has more modulated stereoscopic images than ‘Avatar.’ If you look at any of the recent films from Disney, Sony Imageworks or DreamWorks, they’re beautiful, easy to look at and as good as or better than anything James Cameron did in ‘Avatar.’”

His favorites: “Ice Age 3,” “Bolt,” “Shrek Forever After,” “Monster House” – “they show what the medium can do, and they provide an example of what live action must do.”