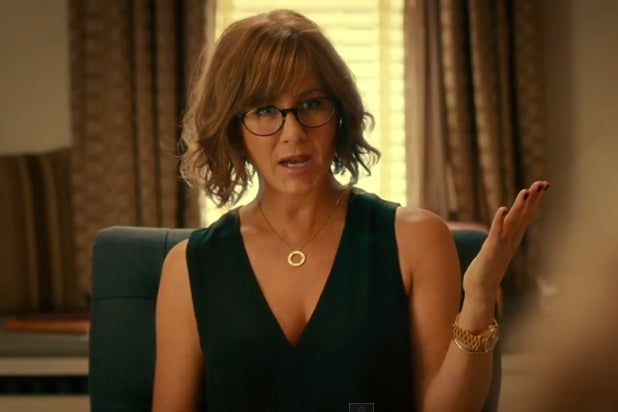 In other words, lots of people get actually slapped within the two-minute, 11-second teaser — and by the end, Will Forte even gets straight up punched-out by Jennifer Aniston.

The quirky film follows a married Broadway director (Owen Wilson) who falls for prostitute-turned-actress Izzy (Imogen Poots) and works to help her advance her career (the thespian one, not the street-walker gig).

Along the way, seemingly every male in the film solicits Izzy’s services, which, when found out, explains all the aforementioned physical assault.

Aniston, who appears to pack a strong right hook, plays the hooker’s therapist; Forte is the “Cake” star’s on-screen husband.

Both Aniston and Wilson’s characters try to get Poots’ to quit being a lady of the night, though those skills come in handy when the perfect stage part comes along. Unfortunately, that transition turns everyone’s lives upside-down.

Rhys Ifans and Kathryn Hahn also star in the oddball comedy, which comes out on May 1. Peter Bogdanovich directed the project, and wrote the screenplay along with Louise Stratten.

The movie was produced by Lagniappe Films and Venture Forth; it is being distributed in the U.S. through Clarius Entertainment.