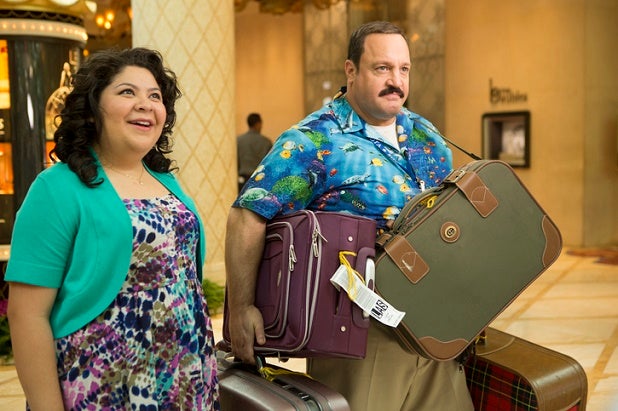 Paul Blart on a Segway speeding past Vin Diesel, The Rock and the “Furious 7” gang is an amusing image, and it’s tempting to think it will happen at the box office this weekend.

But that’s very doubtful, say the analysts, who see the Sony Pictures’ comedy “Paul Blart: Mall Cop 2” coming in at around $17 million in its debut this weekend, about the same range as “Unfriended,” a teen horror story about cyber bullying from Universal.

“Furious 7” still has enough left in the tank to hold them off and win its third straight weekend, they believe, with around $20 million. It’s hard to be bet against the Universal juggernaut, which has taken in more than $803 million at the worldwide box office, with a very strong $255 million domestically.

Kevin James’ rent-a-cop character hardly seems a man of mystery, but “Paul Blart 2” – in which our hefty hero heads for Las Vegas — is a bit of a wild card because it’s been six years since the original film.

That one was a breakout hit, topping its $26 million budget with a nearly $32 million debut in January 2009. It went to $146 million domestically and $183 million worldwide for Sony. James followed that with two more PG-rated comedies for the studio: 2011’s “Zookeeper,” which opened to $20 million and topped out at $80 million, and “Here Comes the Boom,” which disappointed in 2012, debuting to $11.8 million and managing just $42 million.

Without a fast start, Sony will need the $30 million “Blart 2” to show staying power in the next few weeks to see a return. “Avengers: Age of Ultron” will dominate when it opens May 1, but there are no other family comedies in the market, and there won’t be for a few weeks, which will help. There are no reviews, but popular appeal rather than critical acclaim is the key for “Blart,” so watch the CinemaScore.

James co-wrote “Blart 2” with Nick Bakay, and is a producer with Adam Sandler and Todd Garner. Andy Fickman directs and Raini Rodriguez, Neal McDonough and Shirley Knight co-star in the comedy.

It will be in 3,629 theaters, and a good many of those will be in Middle America where James’ humor is most appreciated.

Word of mouth will be critical for “Unfriended” too, and it will travel quickly because this micro-budget horror film has a large and active online following. Its trailer was downloaded 261,941 times on its first day in January — more than “Furious 7” or “Avengers: Age of Ultron.”

No one is expecting blockbuster numbers from the R-rated and micro-budgeted “Unfriended,” which was written by Nelson Greaves, directed by Levan Gabriadze and stars young unknowns Heather Sossaman, Matthew Bohrer, Courtney Halverson and Shelley Hennig.

But its unique presentation — virtually all of the action takes place on computer screens — and its high profile on social media, along with the fact that there hasn’t been a horror movie out since February’s “Lazarus Effect,” all suggest it could break out.

Executive producer Jason Blum came aboard to join producers Timur Bekmambetov and Greaves after Universal picked the film up. It will be in 2,739 theaters.

Tina Fey narrates “Monkey Kingdom,” a nature documentary from Disneynature about a family of monkeys living in ancient ruins founded in the jungles of Polonnaruwa in Sri Lanka.

The film is directed and produced by Mark Linfield and Alastair Fothergill, who previously co-directed Disneynature’s first release, “Earth” (2007), as well as “Chimpanzee” (2012). Fothergill co-directed “African Cats” (2011) and “Bears” (2014).

There are a handful of reviews and all are positive so far.

Disney is releasing it in roughly 2,000 U.S. theaters on Friday, and rolling out internationally next week to coincide with Earth Day.