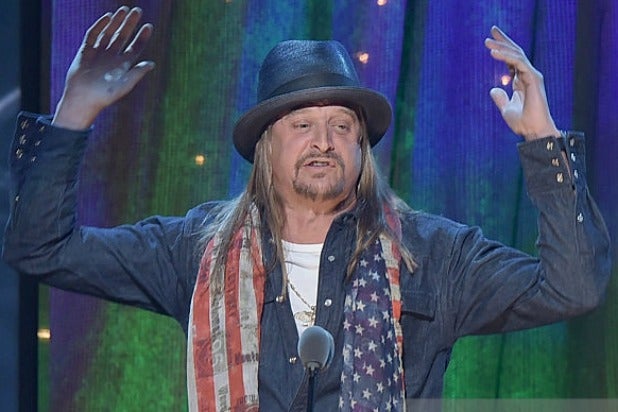 Kid Rock delivered yet another expletive, political speech during his concert in Detroit on Tuesday, blasting “deadbeat dads,” the welfare system and white supremacist groups, and posing the question, “why, these days, is everything so gay?”

According to Time, Kid Rock was welcomed to the stage by the announcer, who called the artist “the next senator of the great state of Michigan.” The musician has been dropping hints about a possible senate run since the summer.

“Seems the government wants to give everyone health insurance but wants us all to pay,” said Kid Rock. “And to be very frank, I really don’t have a problem with that, since God has blessed me and made my pockets fat. But redistribution of wealth seems more like their plan. And I don’t believe you should save, sacrifice, do things by the book and then have to take care of some deadbeat, milking the system, lazy a– motherf—ing man.”

He added, “We should not reward those who can’t even take care of themselves but keep having kid after f—ing kid. Of course, of course we should help them out. I don’t want to stand here and sound like a jerk. But let’s help ‘em out with child care, job training and find them a f—ing place to work. And you deadbeat dads, who refuse to be a man, who refuse to be there for their sons and raise them up to be good men. You no good derelict sperm donors wannabes. I say lock all you a–holes up and throw away the f–king keys.”

The musician once again voiced his disapproval of NFL players who refuse to stand for the national anthem.

“And if you wanna take a knee and sit there during our Star Spangled Banner, call me a racist because I’m not PC and think you have to remind me that black lives matter. Nazis. F–king bigots. And now again the KKK? I say f–k all you racists. Stay the hell away.”

Lastly, Kid Rock talked about gay and transgender rights and stated that things “should not be this complicated” but whatever you have “between your legs” should “determined the bathroom that you use.”

“And why these days is everything so gay?” he said. “Gay rights, transgender this and that. I say let gay folks get married if they want to and I’m not even close to a deathtrap. But things shouldn’t be this complicated, and no, you don’t get to choose — because whatever you have between your legs should determine the bathroom that you use.”

Listen to his speech below.

Kid Rock's political announcement is now! It ends during the next song, as that's all we were allowed to film. (Warning: video contains offensive language)