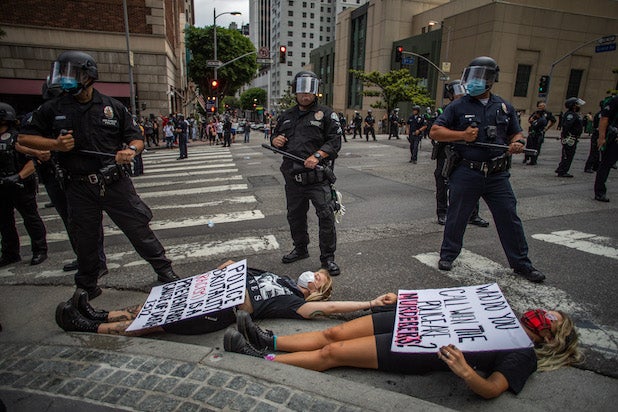 A countywide curfew, within the unincorporated and incorporated areas of Los Angeles County, is in effect
from 6:00 PM to 6:00 AM.

Sunday, while a peaceful protest in Santa Monica had hundreds of demonstrators protesting the death of George Floyd be silently taking a knee “for 2:53 seconds in the middle of the street,” just blocks away, businesses were being vandalized and robbed. “An unlawful assembly declared in Santa Monica — police are ordering everyone to disperse,” ABC7’s Veronica Miracle tweeted.

The situation seemed to worsen as the evening progressed. A car was set on fire and onlookers stood in front of it, taking selfies. Nearby, smoke poured out of a building, as looters with arms filled were seen running out of an adjacent doorway.

“A curfew will be in place tonight citywide, starting at 8 p.m. and lasting through 5:30 a.m. Monday morning,” he tweeted. “All Angelenos should remain inside tonight, with the exception of first responders, people going to and from work, and anyone seeking or giving emergency care.”

Demonstrations Saturday brought about by the death of George Floyd became a mix of peaceful protesters and, as Garcetti called it, a “small group of individuals” vandalizing and looting across the city. He said that protesters should feel safe exercising their rights, but condemned the violence by others.

Sunday morning, 500 to 700 armed National Guard soldiers began patrolling the streets of LA following a night of violence that prompted Gov. Gavin Newsom to declare a state of emergency for Los Angeles county. Businesses were broken into, vandalized, tagged and looted, while police cars were torched, and protesters and journalists were pelted with rubber bullets and tear gas.

Although there is no estimate of the damage suffered by businesses, the destruction is being compared to the 1992 Los Angeles riots and its more than $1 billion in property damage.

“We feel a righteous rage and we have to express it. But the rage must not consume us. It must not be turned back on us. We know that it is only with peace that progress can follow. We must not allow any who feast off of chaos, who hunger for division, who want to replace peaceful protest with images of a nation coming apart, we must not let them win,” Garcetti said in a Sunday press conference.

“Let’s be clear,” he added, “black lives matter and allies from across this city and region organized powerful protests in a beautiful park yesterday. No one should point a finger in the direction of people who were exercising their First Amendment rights.”

In addition, all COVID-19 testing centers throughout LA will be closed until further notified. (UPDATE: The mayor announced on Sunday afternoon that “Free COVID-19 testing resumes on Monday at Dodger Stadium and Kedren Community Health Center. Yesterday, 9 City-run testing sites were open from 10a until 3p but closed 2 hours early. Test sites are closed on Sundays.”)