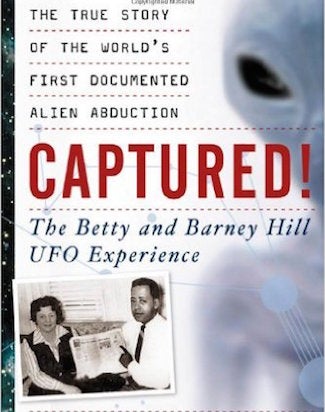 Gotham/Principal, producers of the upcoming “Maze Runner: Scorch Trials,” has partnered with WGA award-winners Bryce Zabel and Jackie Zabel and their Stellar Productions to produce “Captured,” based on the first reported alien abduction that took place 54 years ago this week.

“Captured” tells the story of Betty and Barney Hill, an interracial couple from Portsmouth, New Hampshire who said they were captured by a UFO the night of Sept. 19, 1961. A black postal clerk and a white social worker, the Hills claimed that they had been studied by extraterrestrials and then returned to their lives with missing memories that were later retrieved under hypnosis.

The script, to be written by veteran writer/producer Bryce Zabel, will be based on the 2007 non-fiction book “Captured! The Betty and Barney Hill UFO Experience: The True Story of the World’s First Documented Alien Abduction” by nuclear physicist Stanton Friedman and Betty Hill’s niece, Kathleen Marden. That book contains new information and personal details about the case, and the movie will place the events in a context of both Cold War paranoia and the country’s struggle over race relations.

“‘Captured’ is a true story that explores the birth of modern UFO lore through the eyes of the first Americans to report that they were kidnapped by aliens,” said Eric Robinson, who will produce the film on behalf of Gotham/Principal. “This is an exciting story that is as intriguing, timely and ripe for adaptation today as it was 54 years ago when this incident occurred. We look forward to sharing Betty and Barney Hill’s incredible encounter with audiences all around the world.”

“Betty and Barney were two down-to-Earth people who found themselves in a situation that was literally out-of-this-world,” said Bryce Zabel, the creator of TV’s cult hit about aliens, “Dark Skies.” “Ironically, at the time of their abduction, while the country was focused on deeply divided racial issues, it seems like only the aliens never reacted to the color of their skin.”

“The Hills were very much a part of the times they lived in,” added Stellar CEO Jackie Zabel. “They were an interracial couple in a country that still had segregation laws, and they lived in a city that was next door to a bomber base bristling with nuclear weapons. What they knew and why they were targeted will make for a phenomenal film.”

Screenwriter Bryce Zabel has created or developed five produced TV drama series, worked on the writing staffs of a dozen shows, and written numerous feature films including a No. 1 box office hit. A former CNN correspondent, his feature writing credits include “Mortal Kombat: Annihilation” and “Atlantis: The Lost Empire” as well as TV series such as “The Crow,” “L.A. Law” and “Lois and Clark.”

One of Hollywood’s leading experts on UFOs, Zabel wrote Syfy’s first original film “Official Denial,” worked on the development team for “Steven Spielberg‘s Taken,” and has recently co-authored the non-fiction “A.D. After Disclosure.” A former CEO/chairman of the Television Academy, Zabel is also an adjunct professor at the USC School of Cinematic Arts, where he teaches two advanced courses about writing hourlong TV dramas.

The deal was brokered by Robinson for Gotham/Principal and Jason Leibovitch of Leibo Management on behalf of Stellar.