As Conan O’Brien walks away from "The Tonight Show," he’ll leave behind his brand new studio and many signature bits.

But there’s one thing NBC can’t make him turn in: "Coco." 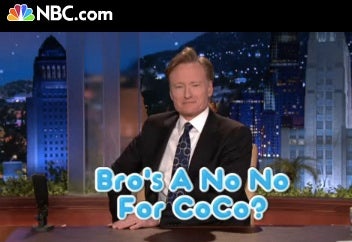 For all his impish sensibilities and odd-duck looks, O’Brien somehow made it 17 years on television without picking up a nickname. That all changed on June 3, when O’Brien hosted "Tonight" for just the second time.

During the debut of a sketch called "Twitter Tracker," an overenthusiastic announcer repeatedly called Conan "bro" — much to the defiantly nerdy host’s irritation.

"Bro’s a No No for CoCo?" the voice replied.

"Don’t call me Coco," O’Brien shot back, and the crowd lit up — perhaps sensing the stickiness of a newly minted moniker.

Later on in the show, guest Tom Hanks, mashing up the reference with an earlier bit in which O’Brien’s real middle name was revealed, called the program "The Coco Christopher Show." 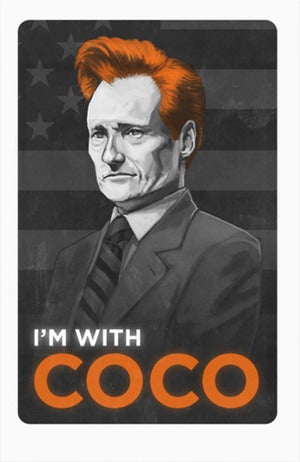 Again, O’Brien protested — and the crowd, of course, egged him on.

The name hung around, albeit below the radar. Flash forward seven months, when the late-night wars spurred on the "I’m With COCO" Facebook and Twitter phenomenon, which also gave birth to Monday’s rallies of the same name.

(Sealing the deal was journalists and bloggers, who are always quick to pounce on an easy meme to use on second reference. Or first.)

In any case, wherever Conan goes next, one thing is certain: Coco will follow.

Are you listening, Fox? "I’m With Coco" sounds like a renegade late-night hit show.

Videos of the "Twitter Tracker" sketch and Hanks appearance below: