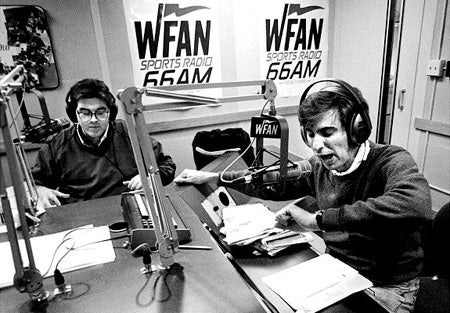 If you’re a sports fan of a certain age and live in the tri-state area, you’ve grown up an avid listener of a certain sports radio station, WFAN, and its motley crew of talk-show hosts.

The station, which has called Astoria, New York, its home for more than 20 years, is moving to Lower Manhattan. Today is the last day it will broadcast from Kaufman Studios in Queens, which, by all accounts, is a dump.

Or, as Neil Best at Newsday calls it, the “most infamous subbasement in sports media history.”

But, in the way New York Mets fans felt bittersweet about their move across the parking lot from Shea Stadium to their pimp, spanking new digs at Citi Field, WFAN staffers have mixed feelings about leaving Queens behind.

"I think a lot of our character comes from not only this building but being our own rogue nation apart from the rest of CBS Radio group,” said one staffer. “God forbid the suits take the R train and come to Queens and check in on us. That has afforded us a bit of independence from all the corporate B.S.”

The move is designed to unite CBS Radio’s five New York stations under one roof, presumably, so the “suits” at CBS can check in on them.

Nostalgia aside, WFAN has seen its share of turmoil over the last few years. In April 2007, Don Imus was fired over an on-air comment he made about the Rutgers’ women’s basketball team.

The station saw its revenues drop $13 million that year.

In 2008, WFAN lost Chris “Mad Dog” Russo, one-half of its top-rated “Mike & the Mad Dog Show,” to Sirius XM. At the time, Russo said his abrupt exit had nothing to do with a reported feud with his longtime co-host, Mike Francesa.

Russo had been offered a multi-year deal worth a reported $2.5 million to stay at WFAN. Sirius offered him a reported $3 million, and gave him his own 24-hour sports channel.