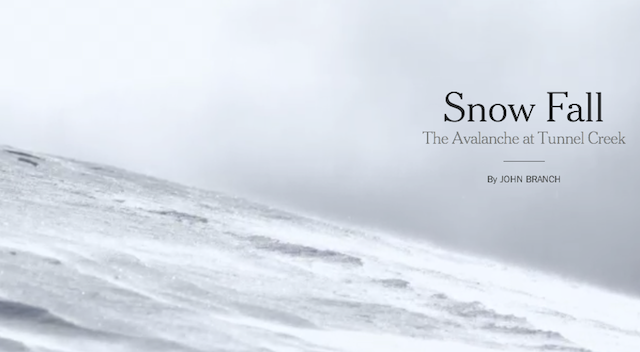 The New York Times lapped the field on Monday, taking home four Pulitzer Prizes for its reporting on Walmart, Apple, China and a tragic skiing accident. Only one other paper, the Minneapolis Star-Tribune, took home more than one award — it won for local reporting and Editorial Cartooning.

The staff of the Denver Post won for its breaking news coverage of the movie theater shooting in Aurora, Colo.

"The Orphan Master's Son" by Adam Johnson won the fiction awards, and "Disgraced" by Ayad Akhtar won for drama.

Three of the four Times awards went to specific writers.

John Branch won the Feature Writing prize for his tale of a tragic avalanche and the science behind similar cataclysmic events. Those stories were part of a larger multimedia series called "Snow Fall," which features a map and assorted photos online.

David Barstow and Alejandra Xanic von Bertrab won the Investigative Reporting prize for their examination of how Walmart's business practices enabled the multinational conglomerate to dominate the Mexican market.

David Barboza won the International Reporting prize for his series on corruption in China, specificially the wealth amassed by relatives of the nation's former prime minister.

The Times' final award, for explanatory reporting, honored the entire staff for the paper's investigation into the lesser known parts of Apple's business. That series, dubbed "The iEconomy," touched on Apple's relationship with Chinese suppliers, its methods of avoiding more strenuous taxes and other methods Apple has used to be come one of the world's most valuable companies.

The Washington Post's Philip Kennicott won for his art criticism.

Here's the full list of journalistic winners, as well as the recipients on the Letters, Drama and Music side:

Staff of the New York Times

Tim Nickens and Daniel Ruth of the Tampa Bay Times

"Embers of War: The Fall of an Empire and the Making of America's Vietnam" by Fredrik Logevall (Random House)

"Devil in the Grove: Thurgood Marshall, the Groveland Boys" by Gilbert King (Harper)

"Partita for 8 Voices" by Caroline Shaw