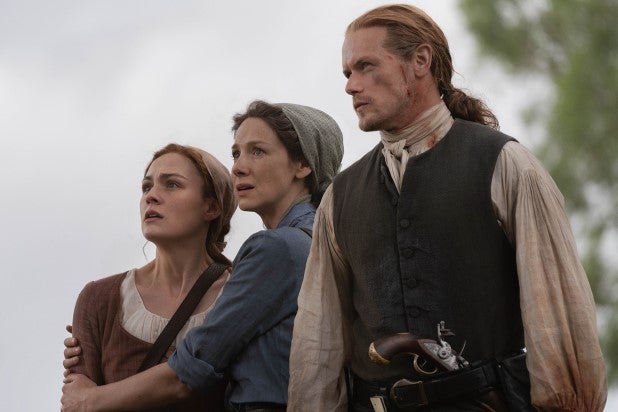 There may be more in store for the “Outlander” universe.

Starz CEO and president Jeffrey Hirsch told reporters Tuesday at the Television Critics Association Winter Press Tour in Pasadena that “story extensions or spins or sequels” are being considered by the network and its partner, Sony.

“We think there’s a lot of opportunity in the ‘Outlander’ universe to have the story extensions or spins or sequels. We continue to look at that with our partners at Sony,” Hirsch said.

“Hopefully we’ll find something that we feel is great and continue to tell that story.”

Season 5 of “Outlander” premieres Feb. 16. The series has been renewed through Season 6.

“Outlander” is based on material from Diana Gabaldon’s best-selling series of the same name. Ronald D. Moore adapted the books for television.

Also Read: Why 'Outlander' Warned Viewers About an Off-Screen Scene

Here is the official description for Season 5:

“Season Five of “Outlander” finds the Frasers fighting for their family and the home they have forged on Fraser’s Ridge. Jamie must find a way to defend all that he has created in America, and to protect those who look to him for leadership and protection – while hiding his personal relationship with Murtagh Fitzgibbons, the man whom Governor William Tryon has ordered him to hunt down and kill. With her family together at last, Claire Fraser must use her modern medical knowledge and foresight to prevent them from being ripped apart once again. However, while focusing on protecting others, she risks losing sight of what it means to protect herself. Meanwhile, Brianna Fraser and Roger MacKenzie have been reunited, but the spectre of Stephen Bonnet still haunts them. Roger strives to find his place – as well as Jamie’s respect – in this new and dangerous time. The Frasers must come together, navigating the many perils that they foresee – and those they can’t.”

Watch the trailer for Season 5 here.