Documentary filmmaker Kirby Dick has made a career of taking on uncomfortable topics, from sexual abuse in the Catholic Church to the secret world of movie ratings. Now, in “Outrage,” opening in Los Angeles and New York on Friday, he delves into the world of closeted gay politicians, making the case that “the closet suffocates the integrity of decent people” and also has a profound effect on public policy. Dick examines the voting records of allegedly closeted politicians and finds many of them to be virulently anti-gay in their public lives, either in reaction to rumors, or in self-denial. 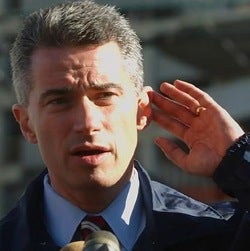 The film features deeply affecting interviews with former New Jersey Gov. Jim McGreevey (left) and follows gay activist-blogger Mike Rogers on the warpath, as he outs closeted politicians, most of them Republican.

Dick agreed to be grilled by TheWrap’s Sharon Waxman at the Avalon Hotel in Los Angeles.

Why did you make this film?

I was looking for an idea in Washington, D.C. Someone offhand said to me, "You know, Karl Rove is gay." My head whipped around at that, and while I haven’t evidence of that with Rove, I discovered a subject that I saw as rich territory.

You get asked that a lot.

What are the policy implications, do you think, of politicians acting publicly heterosexual while living gay private lives?

From very early on it was clear to me that there often is a direct correlation between being in the closet and being anti-gay. Jim McGreevey said it -- he decided to be against gay marriage because he was afraid otherwise he would send the wrong message.

McGreevey told you this?

People who go into politics have to decide whether they’re out or in. Because it’s so underreported, they think they can get away with it. Once these people come out, they realize what they were doing to themselves politically and personally. And they want to share it with others, and let them know there is a better way.

Jim Kolbe (the former Republican member of the House of Representatives from Arizona, who came out in 1996) said it -- that coming out was a near-religious experience.

You’re pretty hard on the press for not pursuing this topic. You think reporters should routinely be asking politicians if they’re gay?

It shouldn’t be asked of everybody. Only in a situation where there’s a strong indication of hypocrisy. 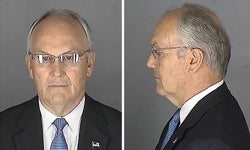 Voting is not subjective. It’s a fair question. And politicians don’t have to answer. That decision is not made by a reporter. My experience is that reporters are inclined to want to ask the question, but they are steered away from it by their editors.

If someone is having an affair, and you now it, and they’re running on a platform of family values, then it’s fair to ask the question. Reporters should report on hypocrisy wherever they see it.

How can you prove that?

What do you hope this film will accomplish?

Three things. I hope it will advance the cause of gay rights. I hope this hypocrisy will be reported on, because it’s not being reported on. And I hope it helps lead to the demise of the closet in American politics.

You showed a remarkable compassion for Larry Craig (above), the senator from Wyoming arrested for soliciting gay sex in a public bathroom.

The Larry Craigs, too, are victims of homophobia. They perceive that they don’t have a choice as an "out" politician.

Where is Larry Craig today?

He didn’t run again. I hear he’s writing a book.