Nintendo stock soared Monday following its “Pokemon GO” release news and the hysteria that has followed.

Shares for the video game company jumped about 25 percent on Monday — or just a hair under 4,000 yen apiece — hitting an eight-month high for the Japanese company.

Translated to our currency, that’s about a $39 improvement per share. Not bad at all for fake little monsters.

Here’s a five-day stock snapshot of Nintendo stock performance to better show the Monday leap during Japan’s own trading day. As you can see, Nintendo shares got some nice gains on Friday as well. 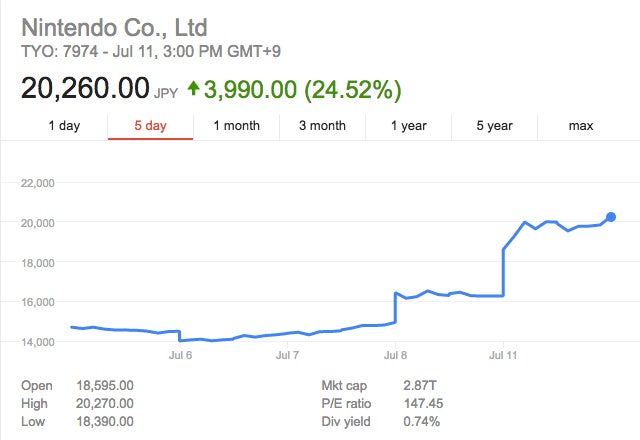 So what in the world is “Pokemon GO” anyway? It’s a free “augmented reality” game for iOS and Android smart devices in which players must physically move around the real world in order to capture Pokemon (short for pocket monsters), which are fantastical creatures from the ever-popular video game/collectible card game/anime franchise of the same name.

Read much more about the mobile game here.

“Pokemon GO” began rolling out in region-specific versions of app stores on July 4.

We spent the weekend walking around L.A. looking for Pokemon. They’re everywhere!

"Pokemon GO" is a pop culture event, and so we went out on the town in Los Angeles to see what kind of Pokemon were around and where they hang out. Click through the gallery to see a selection of those Pokemon we encounter this weekend.