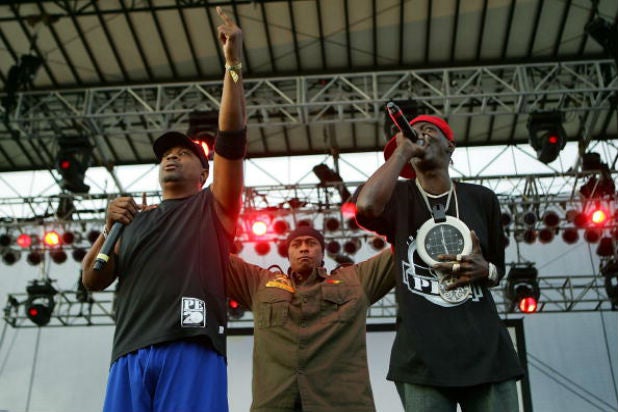 The Public Enemy song “Fight the Power” opened and closed out the Oscars telecast on Sunday night, and one member of the legendary rap group is not happy.

Professor Griff has come out against the use of the song, saying that the Academy is simply trying to pay lip service to the radical change that Public Enemy is all about.

Oscars music supervisor Byron Phillips previously stated why he felt the song was fitting for this year’s ceremony.

“[We wanted to] really set the tone for what the night was going to be and do something that was representative of Chris, and who Chris was, and the vibe and tone Chris wanted to set for the evening,” Phillips told Entertainent Weekly. “There was obviously nothing more perfect than ‘Fight the Power’ for that.”

“Fight the Power” was originally composed for the 1989 Spike Lee film “Do The Right Thing,” which explored racial tension in a Brooklyn, NY, neighborhood.

Lee himself said that he would not attend the “lilly white” Oscars ceremony. Lee, along with other notable black celebrities like Jada Pinkett Smith and husband Will Smith, said they would not attend the ceremony as a result of no actors of color receiving a nomination for the second year in a row.

“I am both heartbroken and frustrated about the lack of inclusion. This is a difficult but important conversation, and it’s time for big changes,” Isaacs said.

The Academy of Motion Picture Arts and Sciences, which votes on the Oscars, has a membership that is 94 percent Caucasian and more than 70 percent male,according to a study conducted in 2012 by the Los Angeles Times.