The film may be an Oscar longshot, with an outside shot at adapted screenplay and supporting actor nominations – but the British comedy “In the Loop” is also one of the funniest movies of the year. A deliciously profane and political screwball comedy that turns a fictionalized version of the run-up to the invasion of Iraq into a fast-talking, obscenity-laced farce, it made a small impact in theaters over the summer but may be best appreciated (especially by American viewers) on DVD, where it’s easier to keep up with the delightfully vicious insults that spew from the lips of characters like Malcolm Tucker, Peter Capaldi’s magnificently offensive press agent (photo below).

“In the Loop” has its genesis in the British television series “The Thick of It”; its writer-director, Armando Ianucci, took some of that series’ characters, particularly Tucker, and moved them in a larger arena, which encompassed a trip to Washington and the recruitment of stateside actors like James Gandolfini and Anna Chlumsky. TheWrap sat down with Capaldi and Ianucci on a recent trip to Los Angeles, after Capaldi had spent the morning walking from his Sunset Strip hotel to the Beverly Center, while Ianucci had been a special guest on the set of a potential Hollywood blockbuster. 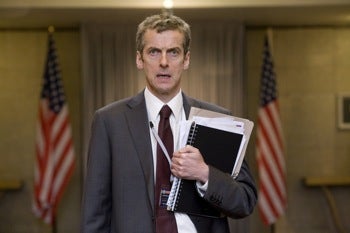 What was the impetus for expanding “The Thick of It” into an international story about the preparations for war?
Armando Ianucci: I wanted to make a screwball comedy. I wanted to do something that had loads of funny lines and funny characters, an ensemble piece that would just make everybody in the theater laugh.

I was just casting about for the right story, not thinking that it was going to be about war, and it just so happened that I got quite agitated about the whole process of the invasion of Iraq. And the more I read about it, the more I thought, this is bonkers. The Pentagon wasn’t talking to the State Department, nobody was quite planning what they were going to do once they invaded … The more I thought about it, the more I thought it was my screwball comedy. And because it was set in the political world and we had “The Thick of It” up and running, I thought it would work really wall, taking that model and recasting, rewriting and telling the story in that style.

On “The Thick of It,” you’re known for using lots of improvisation. Did your process change much when you brought in American actors?
Ianucci: Well, I explained the method to them. And it’s not a highly sophisticated method. We write the script, but I like to have the finished piece feel spontaneous and naturalistic, so I encourage people to rough it up and improvise a bit. But that’s just sort of a trick, really, to make the scripted lines feel spontaneous. And in casting, I just had to be sure that people were aware of that and comfortable with it.

Peter Capaldi: Armando has quite a radically different way of working from anybody else I’ve ever worked with. He does create a highly developed script, which is the text that you have to adhere to, and at the same time he wants you to be very loose and improvise. It’s quite challenging. 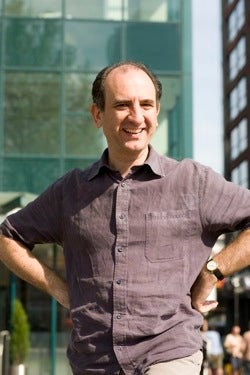 Ianucci: I started off thinking that it was very straightforward, but the more I hear the actors describe what we went through, the more I realize that it’s a very tall order to ask anyone to do. And it’s often on very short notice, as well. We’re rewriting the script all the time, and the definitive version of what you’re expected to learn often comes very late in the day. And not only do I expect you to know it word perfect, but then I want you to muck about with it. For which I can only now apologize.

Capaldi: No, it’s wonderful. I think people are very stimulated by it. And frightened. I do tend to get late-night phone calls from the new actors tearing their hair out and thinking they’ll never be able to do it. For some reason, everybody thinks they’re terrible. I don’t know why.

Ianucci: Having done odd little bits of improvisation myself, I think it’s a very exposing thing, isn’t it? Everyone’s looking at you, and you’re trying to come up with something from nothing.

Capaldi: And also, this isn’t a drama. If you’re in a drama, you can improvise for hours, because all you have to do is just be miserable. But if you’re in a comedy, you have to come up with gags, or funny lines. And often, in the course of getting there, you come up with a lot of terrible stuff, in front of the most skilled comedy writers and directors in the country.

Peter, is the character of Malcolm the same guy as he is on the TV show?
Capaldi: He’s essentially the same character, but on a bigger canvas, and in an area that he’s not used to. He’s going into areas he would not normally have dealt with, and meeting these American characters that can chew him up and spit him out.

Has playing the part of such a foul-mouthed, venomous character changed how people approach you on the street in England?
Capaldi: Yeah, yeah, yeah. People now ask me to tell them to f— off. Or they ask me to abuse them or bollock them, or they give me their cell phones and ask me to phone home and leave a nasty message for them.

Ianucci: It only just struck me that you can actually tell them to f— off if you don’t actually want to deal with them. ‘Cause they’ll just think, thank you very much.

Capaldi: Yeah. And sometimes I mean it. It’s perfect. The more I mean it, the more pleased they are.

Armando, how did you adjust your style of filming, which on the TV show uses two cameras and lots of movement?
Ianucci: I made subtle changes. Movement is fine on the small screen, but on a big screen I think 90 minutes of it would have been intolerable. But I wanted to keep the technique of loose filming, and not feel like I had to use the whole bag of tricks just because it was feature length. So there’s no big pounding score or crane shots of panoramas of London at dawn. I always wanted the audience to feel that what you’re getting is the raw, unedited footage that you’re not meant to see. 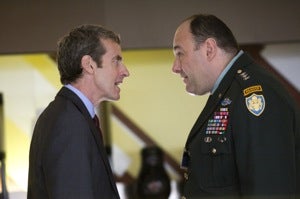 Since the film came out, have the two of you been getting more interest from the American film industry?
Capaldi: I’ve been pleasantly surprised. Everybody seems to like the movie. And everybody loves me. (laughs) But everybody loves you in Hollywood, don’t they? Next week they’ll have forgotten me, but this week they love me. So I’m enjoying that.

Ianucci: I’ve just come from a visit to the set of “The Green Hornet,” to meet Seth Rogen.

Capaldi: Was that fun?

Ianucci: It was. They’d seen the film, and they just wanted to say hello.

Capaldi: There’s a lot of saying hello out here, isn’t there? But it’s been great fun this time. I came out before, when I was much younger, and I found it dazzling and depressing. And this time I’m just finding it fun.

Whether anything comes of it, I don’t know. But there’s some very interesting work being done here. People are always talking about the extraordinary hits of British television, but in fact there’s a lot of really good work being done in America at the moment, and I think that’s quite attractive to a lot of British actors. You get to be a new kid on the block, a new face, without all the baggage of all the years of crappy programs I’ve been doing, apart from “The Thick of It.”

So are you working on your American accent?
Capaldi: Oh yes. It’s a work in progress. Actually, it’s rubbish. The casting director of “The Wire” said to me, “You’ve got to get an American accent going,” so she got this coach for me. He’s in New York, and we do sessions on iChat, which is brilliant. The technology has advanced to the degree where you can spend an hour and a half on the computer with somebody pointing at your tongue and making you do strange things with your mouth.

When I saw the film for the first time, a mild-mannered friend I was with got so mad that she threw an empty Styrofoam cup at an obnoxious guy who was sitting a couple of seats away making loud noises and distracting everybody. And then he got up and screamed and ran out of the theater and threatened to call the cops. All because she was so into your film that she couldn’t tolerate any interruptions.
Ianucci: Well, I’m sorry to hear that. I hope that the violence on the screen, in terms of the language of the film, didn’t encourage actual physical violence. It’d be like “Clockwork Orange” or something – I’ll have to withdraw the film.

Capaldi: I love the cinema, but I hate when there’s people talking. And why is all the cinema food noisy food? Why do they have popcorn, and crunchy things?

Ianucci: And lots of ice in your Pepsi, just rattling about.