They don’t have the history of Grauman’s Chinese, the luxury of the Arclight, the size of Mann’s Village, the cushy seats of the Landmark.

But for filmmakers who want to be in the Oscar race and don’t have the clout of a big studio behind them, a handful of out-of-the-way multiplexes run by Laemmle Theaters and scattered across Los Angeles County may be the gates to the promised land.

When director Raul Garcia and Kandor Moon wanted to get their film “The Missing Lynx” into the Oscar feature-animation race, they ran it for a week at Laemmle’s Town Center 5 complex in Encino. 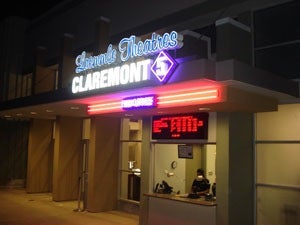 When the makers of another animated feature, “A Town Called Panic,” sidestepped a balky distributor to enter the same race, they did so by booking a week at the Claremont 5 complex in the San Gabriel Valley.

When HBO looks to qualify several short documentaries for the Oscars every year, the company books them into a variety of Laemmle houses, including the Town Center and the Claremont. (Two other popular Oscar sites for the company, the One Colorado in Pasadena and the Grand in downtown Los Angeles, recently closed.)

And when the Academy shortlists are released every year in the documentary feature, documentary short, animated short and live-action short categories, Laemmle’s Gregory Gardner gets the chance to send congratulatory emails to friends and filmmakers – because year after year, for more than a decade, those lists have been filled with films that he helped qualify for the Oscars.

“It’s always exciting when the shortlists come out,” says Gardner, who for the past 15 years has made a specialty of helping shorts and indie films qualify for the Oscars.

This year, he’s already done the Oscar-qualifying bookings for seven of the eight shortlisted documentary shorts, along with documentary features, animated and live-action shorts, and other films whose Oscar fates have yet to be determined.

In recent years, Gardner says, he’s booked the qualifying runs for a variety of Oscar winners, including the documentary features “Taxi to the Dark Side” and “Bowling for Columbine” (which had a wide release after it had qualified), and the 2008 documentary-short winner “The Blood of Yingzhou District.”

“In most categories, it’s not a huge challenge to meet the requirements,” says Garner, who meets with the Academy every year to make sure he’s up with the latest rules in all categories. “Except for feature docs – those rules change quite a bit, and that’s a tough little committee to make happy.”

In most categories, the rules require a one-week run, with at least one showing per day. (Short films only need a three-day run.) But the documentary feature category now requires two showings a day during one-week bookings in both Los Angeles and New York; the requirement forces Gardner to go outside Laemmle, all of whose theaters are located in Southern California.

Then again, the rule isn’t nearly as tough as it was a couple of years ago, when the documentary branch decided to require that films show in 14 different venues in 10 states.

“It wasn’t easy, but I was able to take care of that for some films,” he says. “I had to go outside Laemmle to other theaters around the country, but most of them were happy to get the bookings.”

For qualifying runs, Laemmle charges a flat rate and then gives the filmmaker 100 percent of the boxoffice take. Occasionally that’ll be a profitable arrangement for the filmmaker, but most of the time, Gardner says, “that’s not their concern.”

Their concern is getting into the Oscar race – though except in the documentary category, it takes a lot more than a one-week qualifying run to get a movie noticed by Oscar voters.

“The sad thing is, most people going this route will not get a nomination,” Gardner says. “You’re not gonna get a nomination for best picture if your film has played quietly on one screen in Encino.”

But in the documentary and short-film categories, you might score – and in the process, add another feather in the cap of the least-known Oscar facilitator in town.

“We usually get at least one Oscar a year, usually a feature doc or a short that came through us,” says Gardner.

Then he laughs. “I’ve never been thanked. I’ve never even been invited. But that’s okay.”