CBS’ "Two and a Half Men" tapes the final episode of its seventh season Friday night, and star Charlie Sheen told People it may be his final curtain.

Sheen, who previously told People he was "done" with the sitcom, denied media reports that said his actions were a negotiating ploy.

TheWrap previously reported that Sheen’s reps and Warner Bros. Television, which produces the show for CBS, have been negotiating for his return for the show’s eighth season. 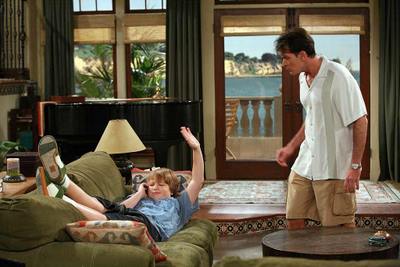 Warner Bros. Television had no comment on People’s report.

However, a senior executive involved in the situation told TheWrap on Thursday: "There is no way Charlie Sheen won’t be back next season."

In his statement to People, Sheen said: “Much speculation and rumor has arisen from my current status surrounding ‘Two and a Half Men.’

"All of the numbers reported in the press are false. Claims from ‘inside sources’ regarding offers from the studio as well as my salary, on their best day, are without merit.

“Approaching the start of the current season and as far back as June ‘09, I submitted my terms for season eight to Warner Bros. and CBS respectfully. Both parties have known the score for over a year.

"In no way, has this been a hasty or negligent 11th hour surprise. I offer this information out of love and respect to my crew, my on-set family, my writers, executive staff, as well as my real family, my dear friends and my loyal fans.

“We tape the final episode of the season this evening. If tonight’s show is the end for me as Charlie Harper, so be it," the statement said.

It’s possible that the impasse could be resolved by Sheen shooting a reduced-episode load for the hit sitcom’s eighth season.

Sheen Enters Rehab; ‘Two and a Half Men’ Shuts Down