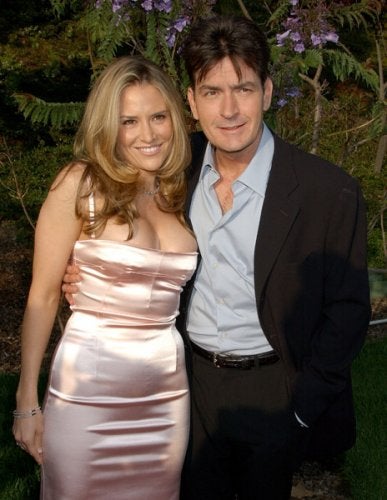 Charlie Sheen pleaded not guilty Monday in Aspen to domestic violence charges, and was scheduled for a July 21 trial stemming from a Christmas Day altercation with his wife.

Wearing a black suit and loosened black tie, he chatted briefly with one of the jailers providing security before the 5-minute hearing began. Though Sheen looked relaxed — certainly moreso than when he was first charged — he didn’t speak when he appeared in Pitkin County District Court in in front Judge James Boyd.

Afterward Sheen’s publicist, Stan Rosenfield, said in a statement: "Charlie is looking forward for this opportunity to clear his name."

Sheen was arrested Dec. 25 in the Colorado winter resort after police received a 911 call from his wife, Brooke Mueller, claiming the sitcom star had a knife and was threatening to kill her.

Mueller was not present at the Monday hearing.

The actor, who was detained under his given name of Carlos Irwin Estevez, was released the next day on $8,500 bond. He was charged with menacing, a class five felony; criminal mischief, a class one misdemeanor; and second degree assault, a class four felony. The latter was reduced to third degree assault in a Feb. 8 court hearing.

If found guilty on all charges, the 44-year old actor, who has had numerous run-ins with the law in the past, could face up to five years in prison.

(Read also: Hollywood’s Bad Boys are Back in Court, and Facing Jail Time)

Sheen was expected to immediately return to California via private jet Monday to resume production on his hit CBS sitcom later this week. More than midway through filming on its seventh season, "Two and A Half Men" went on hiatus when Sheen, rumored at $900,000 an episode, to be the highest paid actor in television, announced on Feb. 23 that he was entering a rehabilitation facility as a "precautionary measure."

The couple’s 1-year old twins have been in the care of Sheen’s parents since earlier this year.

Separated by a restraining order after the Dec. 25 incident, Sheen and Mueller had the order lifted and were reunited on Feb. 8.  Mueller, whose intoxicated state at the time of the Christmas Day 911 call is expected to be a key component of Sheen’s defense, has said she will not cooperate in the case against her husband.

Sources close to the case have previously told TheWrap that Aspen Deputy D.A. Arnold Mordkin, who is running the prosecution, intends to “send a message of zero tolerance on domestic violence” and that Charlie Sheen “won’t walk away unscathed."

Rick Carroll is the managing editor of the Aspen Times; he also covers courts for the daily newspaper. Dominic Patten contributed reporting to this story.