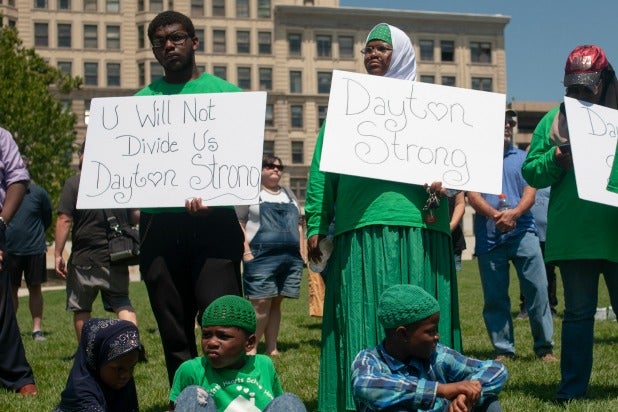 Sadness and outrage is being expressed by celebrities and 2020 presidential candidates across social media over the latest shootings in America, as well as a renewed demand for gun control legislation to be passed by Congress.

“We are a broken nation trapped in the darkness of our unwillingness to ask ourselves why this keeps happening,” tweeted actor Josh Gad, one of the many voices speaking out on Saturday and Sunday.

At least 29 people have been killed and dozens more injured in the past 24 hours in shootings at an El Paso, Texas, Walmart and mall, and at a bar in Dayton, Ohio. That comes after a shooting at the Gilroy Garlic Festival in California that killed three people last week.

Actress Julianne Moore said that her “outrage is exhausted” after the Dayton shooting, while singer John Legend called on officials to “take these weapons of war off the street and fight the evil ideology of white nationalism that motivates many of these terrorists.”

My heart breaks for the city of El Paso. The madness never ends. It is all too much. There‘a nowhere safe from the terror of gun violence in the United States of America. We are a broken nation trapped in the darkness of our unwillingness to ask ourselves why this keeps happening

This is a public health crisis. Hold your lawmakers responsible. @MomsDemand @Everytown ???? https://t.co/pVzKPHeYu1

My heart aches for El Paso and Dayton. Our nation is experiencing these traumas far too often and we need our leaders to take urgent action: take these weapons of war off the street and fight the evil ideology of white nationalism that motivates many of these terrorists.

The sense of outrage was shared among 2020 presidential candidates. Senators Elizabeth Warren and Bernie Sanders demanded urgent action by Congress, with Sanders calling on Senate Majority Leader Mitch McConnell to end Congress’ summer recess early and bring to a vote the gun safety bill HR 8, which was passed by the House of Representatives earlier this year.

We're waking up to the second mass shooting in as many days. I’m heartsick for the 29 people killed this weekend in El Paso and Dayton—and all the other lives we lose every day due to senseless gun violence. We need to take urgent action to end the gun violence epidemic.

Mitch McConnell should bring the Senate back into session immediately to pass HR 8, the gun safety bill that has already passed the House. That's a first step to addressing our serious gun violence epidemic.

“In addition to universal background checks, a ban on the sale of weapons of war, & red flag laws, we have got to acknowledge the hatred and open racism we’re seeing on Fox News, on the internet, and from our Commander-in-Chief,” he tweeted.

A victim's wife asked me, "How do we change this?"

In addition to universal background checks, a ban on the sale of weapons of war, & red flag laws, we have got to acknowledge the hatred and open racism we're seeing on Fox News, on the internet, and from our Commander-in-Chief. https://t.co/YNc73D38pC

According to authorities, 9 people were killed and 26 were injured in the Dayton shooting. It lasted less than a minute.

Less than a minute.

We cannot remain idle and allow this level of carnage to ravage our communities. We need courage. We need to act.

Read more tweets in response to the shootings below:

America, we are at war with ourselves. Another mass shooting, this one in Dayton, Ohio. Let’s just call it what it is. #domesticterrorism

Oh people of the great city of El Paso, my heart breaks for you. I can’t even imagine. America, WTF is wrong with us? Mass shootings a weekly event?! I’m speechless.

Anyone who represents and allows this to happen is part of the problem. Vote them out! https://t.co/iFepGfUz2z

Another insane @NRA talking point often repeated. David is correct—ignoring laws is what makes them criminals in the first place. If we follow this line of logic there is no reason for senators, congresspeople, governors, military, police etc https://t.co/xrovKvS4Tn

Why are you horrified? This is exactly the sort of thing that you, ESPECIALLY and SPECIFICALLY you, facilitate. It’s your cowardly self-interest that keeps these massacres happening. Keep your prayers. You don’t get to mourn. You only should feel shame, you empty greedy ghoul. pic.twitter.com/h7gVrU5Kvp