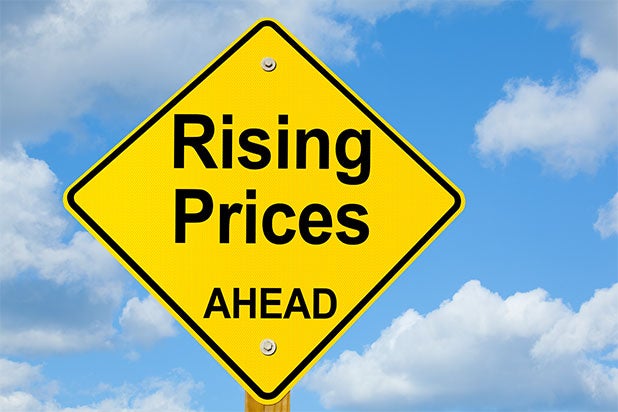 In our previous posts on the box office, we discussed many of the recent trends in the theatrical business. There are several challenges facing movie exhibitors in the U.S. and Canada, particularly the fact that the rate of admissions per person is declining about 3 percent per year.

And if Netflix and other home entertainment options continue to innovate and deliver ever-higher-quality content at attractive prices, cinema attendance will keep on struggling without further innovation (see our post on the Screening Room for an example).

So…what should movie theaters do now to help themselves?

Some have posited that cinemas should deploy dynamic pricing, similar to what airlines do when they sell seats. For example, cinemas could:

While dynamic pricing may work for product categories such as airfare, hotels and concerts, it may offer less of an opportunity for movie exhibitors, given some industry-specific issues. Put another way, if revenue is a function of price and quantity, and cinemas can be as flexible as they want with the quantity, what else is there to gain by being flexible with the price? 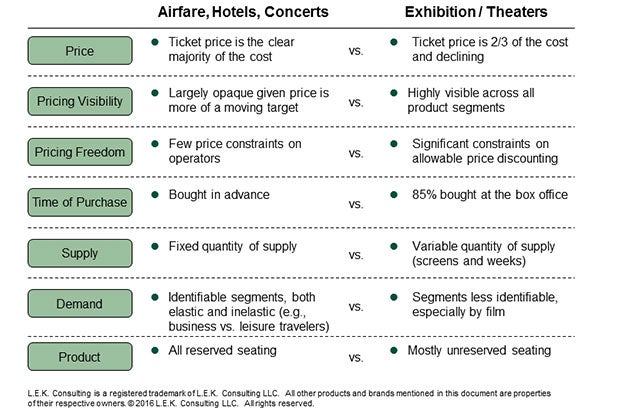 As can be seen in the table above, most of the elements that lend themselves to dynamic pricing in other sectors do not align for movie exhibition.

For example, the cost structure is different. For movies, the ticket is a smaller portion of a consumer’s total cost (after items like popcorn, parking, babysitters and so on are added in) compared to, say, concerts, where an attendee spends most of his or her money on the ticket.

The mechanics of the price itself are also different. With airline tickets, there is no single visible posted price (because each airline has many routes, many take-off times, many different travel periods during the year, etc.). This gives airlines some more flexibility, especially since they can largely price how they see fit. But with theaters, a clearly posted movie ticket price is very explicit, with little room for maneuvering, especially given the contracts that exhibitors have with the studios.

Purchasing behavior is different, as well. Nearly all travelers buy airline tickets well before they arrive at the airport. But consumers buy nearly nine out of every 10 movie tickets at the theater.

Supply provides another variable. Hotels can’t create new rooms each day, but theaters have the flexibility to decide the number of screens on which movies play, even at the last minute.

And demand is different. Airlines have sales that drive new travel on certain routes. But there are few consumers who go see a film like the latest “Star Wars” blockbuster because there is a special ticket sale.

Finally, although some studios and cinemas offer reduced prices at certain times of the day, they will resist lowering sales even further with additional price cuts.

There are, of course, arguments in favor of implementing dynamic pricing:

However, as discussed above, there are probably more reasons against dynamic pricing than there are arguments in favor of it.

Thus, dynamic pricing will likely struggle. While some price-up opportunities will work (like raising the cost of tickets on holidays or opening weekends), these will make going to the movies even more expensive relative to other options such as Netflix and Hulu.

As we wrote in one of our prior posts, the cost of going to the movies has been escalating, while the price that consumers pay for in-home entertainment has declined. Thus, while dynamic price-ups might drive short-term cash flow for cinemas and studios, those increases will only exacerbate the 3 percent per year audience decline.

In summary, while dynamic pricing offers theaters some pockets of opportunity, the film-exhibition industry may not yet be at a stage where it can expect such changes to cause a significant uptick in value.

In our next post, we will cover a much more promising idea, subscriptions.